THICK AS THIEVES: PERSONAL SITUATIONS WITH THE JAM by IAN SNOWBELL & STUART DEABILL (2012) 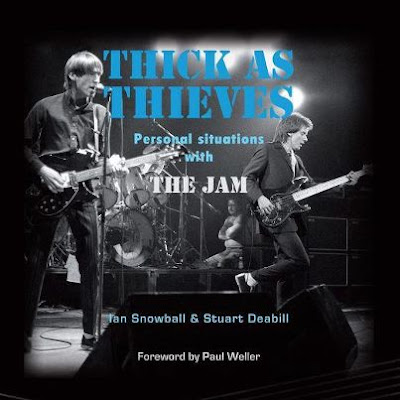 I can’t overstate the importance The Jam. It seems melodramatic to say they changed my life - seeing as I was only twelve when I first heard them – but they shaped it to such a degree I can’t imagine what it would’ve held had they not existed. As I glance at my record collection, my books, my clothes, even Mrs Monkey, I can trace them all back to watching Top of the Pops on 22 October 1981.

I only became interested in pop music that year and began to buy hits of the day, be they Adam & The Ants, Japan, Siouxsie & The Banshees or – just to demonstrate my taste was still developing – Rod Stewart’s “Young Turks”. I remember chatting to a school friend in chemistry class and him asking if I liked The Jam. I said of course, but in truth had never heard them. He sung a bit of “That’s Entertainment” and I acknowledged it was a great song. Love that one, I lied. This must’ve been September ’81 so I don’t know how I completely missed “Funeral Pyre” in June (maybe because it was the school holidays and I was too busy playing football over the park) but come that Thursday in October when The Jam were due to mime “Absolute Beginners”, I was ready. I wanted to like them.

On first hearing I wasn’t sure. There didn’t seem any discernible chorus or hook, just a bit of a jumble for little more than two and a half minutes and then it was over. Paul Weller though looked brilliant in his dark denim jacket, shades and great hair. Two days later they were on Swop Swap doing “Absolute Beginners” and it’s B-side “Tales from The Riverbank”. By the afternoon I’d been to WH Smiths in Uxbridge and bought it and, incidentally, “Every Little Thing She Does Is Magic” by The Police. That would be the only time I’d buy a Police record but soon set about finding further Jam records. I played both sides of the one I owned repeatedly and studied the picture of them on the back of the sleeve gazing through an iron gate. Through The Jam I discovered mods, the sixties, soul music and they even stirred a political consciousness. The lyrics to “Town Called Malice”, soon to be pulled from the pages of Smash Hits were stuck on my wardrobe door, said all I needed to know about the country I was growing up in. They had honesty, integrity and it felt like a grown-up following a band with important things to say.

After they played "Malice" and “Precious” on Top of the Pops in January, Ma Monkey offered to blow dry my hair in what she called “a mod style”, an approximation of Weller’s Marriott curtains for school the next day. I think I only kept it for a day or two as felt a bit silly and self-conscious. Fourteen months from my introduction they were no more but I was up and running. Paul Weller breaking up the band at the height of their success to be true to himself, because his heart wasn’t in, wanting to quit at the top, plus his refusal to entertain the idea of cashing in on a reformation for the same reasons, has been a massive inspiration to me ever since. The Style Council continued as a guiding light, then I’d find my own path but all roads trace back to the suitably titled “Absolute Beginners” and that early autumn evening lying in front of the telly.

My story is far from unique as this new book Thick As Thieves shows. There are hundreds of testimonies from fans across over 200 pages saying similar things. It tells of The Jam through the memories of those there at the time. Those fans were incredibly young but I’ve never met anyone embarrassed about liking them as a kid and people are still proud of their association with them (fair to say some probably haven’t moved on too much from those times). The occasions I’ve had blokes (always blokes) collar me in pubs and ask me if I like The Jam and then stand there as they tell about when they saw them at Wembley or Brighton or the Rainbow, or how they witnessed a sound check, or bumped into the band shopping in Mellandi on Carnaby Street. This book is by those people, for those people, told broadly chronologically with their records used as stepping stones. There are also brief recollections from Weller, Bruce Foxton, Rick Butler, people who worked with them and some great unseen photographs and items of memorabilia. I especially like the programme from the Sheerwater Youth Club Summer Fete dated 15th June 1974. Amongst the attractions that afternoon were weight lifting, bowling for a pig, win a goldfish, raffle, clowns, score a goal, roll and penny and Jam in concert at 3.30, sandwiched between a karate display and children’s races.

Good music books make the reader return to, or discover, the music it writes about. For the first time in years I’ve now played all The Jam albums and can’t pick my favourite: it used to be Setting Sons, and then it was Sound Affects, now it might be The Gift. But All Mod Cons is pretty special too. They were - and remain - a special band for many people and Thick As Thieves is a fine tribute, mixed with nostalgia, to them and their enduring legacy.

Thick As Thieves: Personal Situations with The Jam by Ian Snowball and Stuart Deabill is published by Marshall Cavendish, priced £12.99.
Posted by Monkey at 12:30