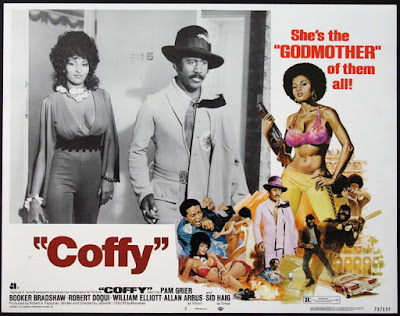 1.  Claude Huey – ‘Feel Good All Over’ (1966)
On the flip of this sparse but effective soul shuffler is ‘The Worst Thing A Man Can Do’ which, according to Claude, is taking the love of a good woman for granted which displays a disappointing lack of imagination. Still, I’ll forgive him for ‘Feel Good All Over’.

2.  The Wrongh Black Bag – ‘Shake Me, Wake Me’ (1968)
A frantic version of Al Kooper’s Blues Project song and released as 4a 5 on Mainstream Records. On their way to the studio the band were involved in a car crash and the session cancelled, never to be rescheduled. Most unfortunate.

3.  The Lloyd McNeill Quartet – ‘Dig Where Dat’s At’ (1969)
Self-released in 1969, Asha has recently been reissued by the ever-dependable Soul Jazz Records. They refer to it as deep jazz and spiritual jazz, and it is, but it also includes this sprightly flute-led groover.

5.  Curtiss Maldoon – ‘Man From Afghanistan’ (1971)
As I’ve said elsewhere, considering most of the tracks on a new 3-CD set, One Way Glass: Dancefloor Prog, Brit Jazz and Funky Folk 1968-1975, were made by blokes who thought teaming a vest with sandals as the height of dressing up, it’s one of the most rewarding collections I’ve heard for a long time. This track was a fairly arbitrary pick but when I checked the booklet for more info was delighted to discover the Curtiss Maldoon LP it came from featured most of Mighty Baby.

6.  James Brown – ‘Time Is Running Out Fast’ (1973)
From The Payback, this thirteen minutes of heavy rhythms sounds like JB attempting to outdo Fela Kuti at his own game. Irresistible. Check out the lyrics.

7.  Roy Ayers – ‘Aragon’ (1973)
From the soundtrack to Coffy, which stars Pam Grier as a nurse who murders a string of drug dealers in revenge for her sister getting hooked. "They call her 'Coffy' and she'll cream you!"

8.  Supergrass – ‘Richard III’ (1997)
The other day I bought The Best of Supergrass for the bargain price of one English pound. ‘Richard III’ may or may not have been about that bloke they found buried in a Leicester car park.

9.  The Oscillation – ‘Waste of Day’ (2015)
Bug-eyed Floydian psychedelic stew with a bassline that gets under the skin. A few trips around the mind to this is no waste of time.

10.  The Limiṅanas featuring Anton Newcombe – ‘Istanbul Is Sleepy’ (2017)
Moody French couple and the Massacre man wake ya from your dreams with a relentless vibrating noise to rattle the bed.
Posted by Monkey at 09:55 2 comments:

In the 2015 obituary for his friend, John Hopkins, John Boyd wrote the “counterculture took much of its inspiration from him, and he was the closest thing the movement ever had to a leader.”

Hoppy was central to so much of the 60s underground scene, his restless energy pivotal to sell-out poetry readings at the Royal Albert Hall; the creation of underground newspaper, International Times; the ground-breaking psychedelic all-nighter, the UFO Club; the 14 Hour Technicolour Dream at the Alexandra Palace; and even sowing seeds for the Notting Hill carnival. Hoppy was a scene-maker, creator and pied-piper, clearing a path for others to follow. The authorities were less enamoured with his activities, raiding his flat for a small amount of Mary Jane, they threw him in jail, calling him a “menace to society”.

Before all this took up his time Hopkins was primarily a photographer, with his focus on political protest, social issues and music, appearing in, amongst others, Peace News, The Sunday Times and Melody Maker.

Now, I’m delighted to see a website, HoppyX, has recently appeared dedicated to Hoppy, his life and achievements. The image gallery is stunning and the recollections from his friends are delightful and inspiring in equal measure.

“Hoppy was diagnosed with Parkinson’s Disease in 2007, around the time of his 70th birthday. The decline is slow but inexorable. Hoppy remains active in his chosen pursuits until his physical faculties fail him, graciously allowing himself to be interviewed many times by younger generations as they gradually discover his historical significance.”

I can vouch for this. After publication in 2008 of From The Hip: Photographs of John ‘Hoppy’ Hopkins 1960-66 by Damiani, I went to Hoppy’s flat to collect a copy of the book. I expected to simply go there, pick it up and come away but was invited in, made a cup of tea, and we spent a long time going through the book, page by page, with Hoppy providing generous commentary to anything I paused on. I’d later purchase a print of a suitably steely-looking William Burroughs taken in New York.

After that, and with his health obviously deteriorating, I’d still frequently see Hoppy attending various exhibitions, talks and readings around London. That I’d see him more than any other person at these events always struck me as how deeply rooted and supportive he was – still - in the more marginal elements of the arts and society. He never gave it up.

Before you go to explore Hoppy’s site, the last word to the man himself whose inscription in my copy of From The Hip reads: “To Mark & Paula, Be happy for no reason, Best wishes, Hoppy.” 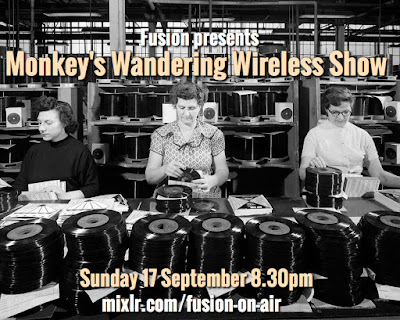 Monkey’s Wandering Wireless Show returns to Fusion for an hour this Sunday and, as you can see above, my team are working hard to find as many gems to squeeze into the show as possible - under strict instructions for nothing the wrong side of three minutes.

You should know the score by now: an hour of brilliant music – anchored in the 60s but drifting into other decades – with me occasionally interrupting to say what you’re listening to. That’s about it. Nothing too complicated. If you can listen live then that’s greatly appreciated, if you want to join in the chat even better, but if not convenient then the show will be available to catch-up whenever convenient.

If you’ve never listened before, give it a go. If you have, then I trust you'll come back...

Cheers comrades, see ya there.