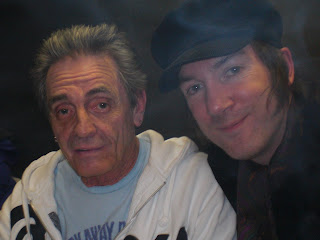 A selection of tunes the neighbours have been treated to the last couple of weeks.

2. Oscar McLollie and his Honey Jumpers – “Wiggle Toe” (1954)
If you went to the hop in 1954 you can bet there was some ridiculous dance to this swingin’ humdinger.

3. The Valadiers – “I Found A Love” (1963)
Quiz question: Who were the first white group signed to Motown? Answer: The Valadiers. A sprightly doo-woppish 45 recorded in ’61.

4. Jimmy Rushing – “My Bucket’s Got A Hole In It” (1963)
Mr Five by Five they called him. Five feet high and five feet wide, he made his name hollering for Count Basie and could swing with the best of them as shown on this big band treatment of the old Hank Williams tune.

5. Clydie King – “The Thrill Is Gone” (1965)
Not the BB King song but a truly stunning Spectoresque weak-at-the-knees soul heartbreaker. I’ve said it before but if there’s a more gorgeous voice than King’s out there I’ve yet to hear it. Don’t forget “Missin’ My Baby” either. Or “My Love Grows Deeper”. Or “If You Were My Man”. Or, Christ, near nuff all of them.

6. The Kinks – “Two Sisters” (1967)
Once met a bloke in a San Diego bar who was raving about the time he met Ray Davies and how he’d been a fan since the beginning. “Oh yeah, what was the first record you bought?” I asked. “The first one, Schoolboys In Disgrace” he said, all chuffed like. Quite what he would have made of Something Else from nine years earlier I can’t imagine.

8. MC5 – “Baby Won’t Ya” (1971)
The magnificent MC5 out-Face the Faces, out-roll the Stones and out-boogie Bolan in five and half minutes of sheer exuberant joy. As you can see from the profile picture I managed to meet bassist Michael Davis the other night at the Dirty Water Club and spent about half an hour chatting away (see picture above - that's Davis on the left!). Wonderfully open chap with an impressively level attitude. Top man.

9. Sandy Denny – “It’ll Take A Long Time” (1972)
I’ve never got on with those supposed classic Fairport Convention albums but thought I’d try Denny’s acclaimed solo stuff. Still don’t dig it. Her voice grates on me; it’s a shame because musically it’s quite beautiful in places. “It’ll Take A Long Time” is a good case in point, had Ronnie Lane sung it, it’d be almost perfect.

10. Todd Snider – “Iron Mike’s Main Man’s Last Request” (2004)
On a LP (East Nashville Skyline) that’s chockablock with clever/intelligent/amusing lines, none catch the ear quite like “You’re still the champion and everybody knows you are/ Come on Iron Mike, let’s take the Porsche to the titty bar”.
Posted by Monkey at 15:40 No comments: