“I AM AN ARCHITECT”: THE NIGHT I MET JAMES DEAN BRADFIELD 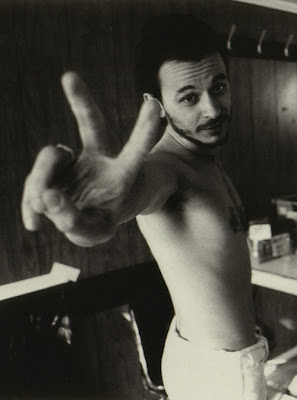 "Most of my heroes don't appear on no stamps" - Public Enemy, Fight The Power.

On Tuesday I went to the launch of Stealing Sheep’s Into The Diamond Sun album at Madame JoJo’s in Soho.  There were a few people milling around outside and a short queue. As I tried to work out which was which I heard a familiar Welsh accent to my left.  James Dean Bradfield, dressed head to toe in black, was stood against the wall chatting to, what I assumed by James’s verbosity, a friend. I’ll admit I went a little dizzy. What an opportunity to meet him. But what could I say? My mind went blank with nervous excitement. Should I just say hello? That’s a bit weird though. Is it acceptable to intrude? I had no witty one-liners up my sleeve and briefly thought about ignoring him like everyone else. But everyone else doesn’t listen to the Manic Street Preachers on a near daily basis; doesn’t consider The Holy Bible the greatest album ever made; “Motown Junk” the most thrilling single ever made; hasn’t seen countless Manics’ gigs over a 21 year period; and doesn’t have a mild Richey Edwards obsession. You get the idea. I had to bite the bullet. It doesn’t matter what line of business you’re in, everyone likes to be appreciated and Bradfield is intelligent enough to know when it’s genuine and not bullshit. I only wanted to say “Thanks” anyway, so eventually stuttered “Sorry to interrupt” – I hadn’t interrupted, there was a break in their conversation – “I just wanted to shake your hand.” Ah, thanks, he said and nearly broke my fingers. I mumbled something about thanking him for all the music and the gigs and stuff. He seemed quite chuffed and asked my name. That was nice. I debated whether to say Monkey or Mark. My friend Gemma once got his autograph for me when she worked at Fred Perry. It says “To Monkey, James Dean Bradfield”. He wouldn’t remember so I plumped for Mark. It seemed easier.

I told him the Manics are responsible for two of my all-time favourite gigs, both from 1991: The After Dark Club in Reading and the Diorama off Great Portland Street. “Fuck, you must be as old as me”.  He remembered the Reading gig as being rough and a lot of trouble. It was. Apart from a dozen of us slipping around in the beer at the front of the stage the rest of the venue gave them loads of abuse, constantly chucked stuff at them, and the antagonism worked both ways. It was brilliant. They survived around twenty minutes and fled. James said they got into a fight afterwards as well. “That was the first time I got proper bottled. Still got the scar on my head,” he felt for the mark, “and that’s one of your favourites? Thanks for that!” It was exciting though. The Diorama was only a few months later and when they sang “You Love Us” it had moved from irony to a statement of fact. “That was the first – no, second – time we met Traci Lords.” I told him I remembered seeing him around the back with her. I meant of the venue. “Whoah, steady!” It was a memorable night but not that memorable.

James asked what I did. Hmm, what do I do? I listen to music; write a blog; go to QPR, nothing that competes with being a Manic Street Preacher. I don’t like talking about jobs at the best of times and certainly didn’t want to talk about myself. “Oh, nothing much, it’s a bit boring”. He pressed me harder. Did he really want to know about producing a risk assessment for working in a hypoxic environment? Subconsciously I must’ve thought about the song “Faster” and muttered his opening line, “I am an architect.” Why did I say that? Too late. “Wow, you call that boring? Are you freelance?” Oh fuck. Yeah. “What you working on?” I’d really dug myself a hole now, I don't know a thing about architecture. I said I didn’t want to talk about work on a night off. “Come on, I know my Le Corbusier.” Oh crikey. Le Corbusier. I’ve read him on a Manics’ record sleeve. I’ve studied those quotes, learnt from them for years and now the time I’m tested I couldn’t remember the first thing about it, even what record it was from. Massive fail. (It was “Design For Life” which I’m glad about. Had it been 1991-94 I’d be quite cut up about it). “I’d sooner talk about rock and roll, although I realise that’s talking about your work.” After a bit more ribbing he let it drop.

Moving on, James asked if I was going to see Stealing Sheep. Yes, I like how it’s difficult to predict what’s coming next in their songs. He’d heard one of their tracks and couldn’t work them out but thought they were interesting. “Are they folk? Are they indie? I can’t work it out.” He hadn’t been to any gigs for a while as the Manics had been doing festival shows abroad (he looked fit and tanned) and now – aged 43 – has his first child, nine months old. I said I’d managed to avoid children. Was it hard work? He said I should do it and joked we could get vitamins to keep our strength up. I told him I saw their big 02 gig last year. I said this mainly to show unlike most of their early followers I’d stuck with them all these years. Not that that’s been any hardship. I thought about asking if the band were working on any new material or what had happened to seemingly make them change their mind about calling a day last year, but thought it might sound like I was interviewing him so left it.

He was very relaxed (unlike me) and good fun. It was him leading most of the chat. There was no sign of the furrowed brow and closed-eyes grimace he does in television interviews although he did go a bit squinty when trying to recall the last time he came to Madame JoJo’s. I considered asking for a photo together but it would’ve interrupted the flow of the conversation and, more importantly, I’d been up since five AM, had grey stubble, it had been a hot day and I was acutely aware my hair looked shit.

By then some of his old Heavenly Records cronies had steamrolled their way between us and I’d reached the doorway into the club so turned around to say goodbye and to have a good night. “See ya Markie,” he shouted. See ya Markie? See ya Markie!  I’ve never heard him sound so good. Never meet your heroes? Sod that. James Dean Bradfield, you’re an absolute diamond geezer. Thanks. 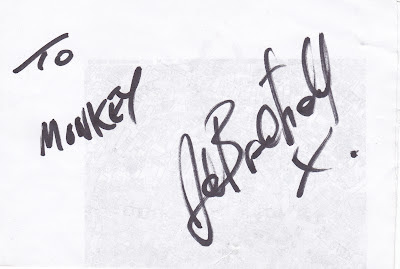