ANGELHEADED HIPSTERS: IMAGES OF THE BEAT GENERATION at the NATIONAL THEATRE 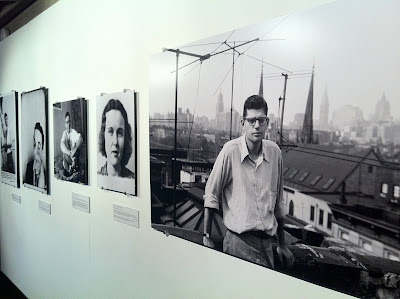 “Angelheaded hipsters burning for the ancient heavenly connection to the starry dynamo in the machinery of night”.

Many of those hipsters who hollow-eyed and high sat up smoking in cold-water flats contemplating jazz in Allen Ginsberg’s “Howl” can now be seen adorning the walls of the National Theatre on London’s Southbank; a far cry from when they were the motley crew of aspiring writers, junkies and madmen (some all three, and always men) the world had yet to discover.

Ginsberg was obsessive in chronicling and championing the lives of himself and his friends in diaries, notebooks, poems and letters, and when he happened upon a second-hand Kodak camera in New York in 1953 he added photography to his arsenal. The pictures he took that year turned out to be the most historically important and thus interesting. The Beat Generation nucleus of Ginsberg, Kerouac and Burroughs together again in New York had yet to achieve fame and notoriety and their lives would soon take different paths but here we see them in Allen’s apartment variously larking around, reading, deep in thought or outright posing – most amusingly in the case of a skinny, shirtless Burroughs adopting the improbable stance of a bare knuckle fighter.

For all Kerouac’s good looks - and their rapid disappearance – it’s the Burroughs pictures that are the most revealing. There’s a touching shot of him sitting on a rooftop with Arlene Lee (“Mardou Fox” in Jack’s The Subterraneans): she dressed in archetypal beatnik black with headscarf and looks at him with a cute cheeky face, he in return wears a beatific smile at odds with his persona as a misogynistic cold fish. Mind you, she was typing up his manuscripts of Queer and The Yage Letters.

By 1957, the year of On The Road, it was Kerouac’s turn at the typewriter as he worked through nightmares attempting to fashion readable pages from Burroughs’s notes that would eventually become Naked Lunch. Ginsberg catches him taking a breather in the yard, cuddling a cat in the afternoon sun.

Not everything in the exhibition was taken by Ginsberg but he was the source for the majority and as years go by it’s noticeable how his photography changes from the quick snapshots in the ‘50s to the studied compositions of the ‘80s and ‘90s, which include Gary Synder, David Hockney, Robert Frank and of course, still, William Burroughs, at home thumbing through a pile of gun magazines.

Their minds may have been destroyed by madness but these hipsters still burn and this collection offers eyeball kicks a-plenty. Allen Ginsberg – I’m with you in London.

Angelheaded Hipsters is in the National Theatre foyer, Southbank, London until 20 March 2011. Admission free.
Tweet
Posted by Monkey at 18:20