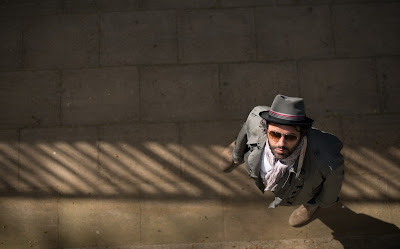 The debut solo album by former Five Thirty man, Tara Milton, has been a long time coming. In the early 90s his cocksure modish three-piece released the classic Brit Pop forerunner, Bed, and appeared on the cusp of making it big but internal fighting split the band in ’92.

Milton now shoulders much of the responsibility. “I just needed a good talking,” he reflects. “There was no one there to do that and I became more and more like crazy Roman Caligula.” Twenty years after disbanding second band the Nubiles, Milton returns to the fray. What took so long?

“I’ve tried to do it before but had a lot of personal problems to deal with after the Nubiles. I’d lost all my confidence, completely, and had to make some decisions about the way I was going to live. One thing I knew was that I love music and I love writing songs. If I was any kind of musician at all I would end up back in the studio doing the things I wanted to do.”

After returning to London from long spells in Japan, “teaching kids music and indoctrinating them with Five Thirty”, and with money scarce, completing the album took time. “The original intention was to do a very quick kind of record with Sean Read from Dexys, who arranges the brass and so forth. It just didn’t pan out like that at all.”

Far from a hastily knocked together record, Serpentine Waltz is lavish, thoughtful production. Some of Milton’s previous problems are meditated upon through its cinematic sweep: dreams and nightmares, twists and turns, characters and scenes blink in and out of view like ghosts. It’s a late-night journey to the dark end of the street, the other side of the tracks.

The extraordinary ‘Double Yellow (Lines 1 & 2)’ begins parodying Bob Dylan’s ‘A Simple Twist of Fate’ with “the intimacy of couple going through a separation. One of the most powerful songs Dylan did and I wanted to do a London take on it.” The sprightly tune then tumbles into a dramatic breakdown, featuring a sample of American writer Henry Miller’s passionate diatribe against the city, set to a freeform Miles Davis style accompaniment.

"Think of an album that blew you away. I felt like that the first time I read Miller’s Tropic of Capricorn. I didn’t know a writer could do that, I thought only musicians could. He lifted a twelve-month depression with two paragraphs of writing. He always wrote from the perspective of the downtrodden individual who simultaneously was on-fire, smoking.”

Serpentine Waltz’s mood is brightened by a folky fingerpicking style and richly embellished with trumpets, strings, piano, mandolins and oude. The sumptuous Beach Boy inspired chorus to ‘Getting It On With The Man In The Moon’ bursts light through the clouds.

"Song writing is still the thing, the big thing, isn’t it? But it’s got to come out of life.”


Tara Milton has seen life from all sides and lived to tell the tale. It’s great to have him back.

This article first appeared in Shindig magazine. Serpentine Waltz by Tara Milton with the Boy and Moon is out now on Boy and Moon Recordings. www.taramilton.co.uk/  Photo by Phil Miller.
Coming soon: Tara reflects on his time in Five Thirty... 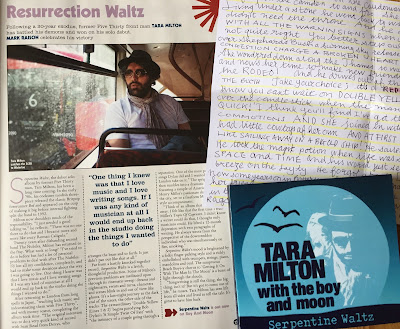