JOHN "HOPPY" HOPKINS: AGAINST TYRANNY - PHOTOGRAPHS AND PSYCHEDELIC ART FROM THE 60s COUNTERCULTURE 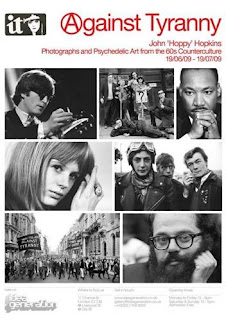 I’ve banged Hoppy’s drum on here before and for Shindig magazine so I don’t propose to list his lengthy achievements again; let’s just say he provided the foundations and the cement for the 60’s underground scene and tell you about his huge new photo exhibition at the Idea Generation Gallery.

Covering the early to mid 1960s these shots document politics, protest, poverty, police, pop, pot, poets, beats, beatniks, Beatles, beboppers and bikers. That’s just for starters. There are copies of International Times (which he co-founded), Nigel Weymouth’s posters from the UFO Club (which he ran with Joe Boyd), a new half hour documentary and grainy archive footage.

Many photos were featured in From The Hip, published last year after a friend accidently discovered the originals stuffed forgotten under Hoppy’s bed, but now he’s added enlightening captions that not only add to the enjoyment of these fabulous pictures but show he’s lost none of that fierce independent spirit nor those quaint old hippy ideals of justice, freedom and fair play. With most flowers from that generation now withered and died, Hoppy’s roots remain as solid as ever. As someone once said, “what’s so funny about peace, love and understanding”?