VIC TEMPLAR DOES HIS CHUNKERS 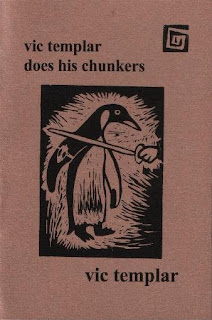 I like writers who suffer for their art. Who drag themselves through the streets at dawn looking for an angry fix. Who burn in the bowels of hell before clawing themselves back by their filthy fingernails only to lose their grip and slide further in to the abyss. Who slip from wanton hedonism to abject misery in the space of a page.

Vic Templar is not one those writers. Yet his little book of short stories shows he too has suffered. Stung by a wasp, he was. On his tongue. It’s not quite walking 47 miles of barbed wire, using a cobra snake for a necktie, but it’s a start. His warm, matey, nostalgic style is more Nick Hornby than Nick Kent but his musings on his nan, his dustman, playing golf with monks, and forgetting his friend’s name raise a sneaky smile.

Vic Templar Does His Clunkers is the equivalent of sitting for hours on a Sunday watching repeats of Come Dine With Me, with a warm mug of tea in one hand, a custard cream in the other, and the cat curled up on your lap. And, believe it or not, there are times when that’s preferable to drinking absinthe from a shoe with winos, junkies and whores.

Vic Templar Does His Chunkers is published by Blackheath Books, priced £5.
www.blackheathbooks.org.uk
Posted by Monkey at 20:06