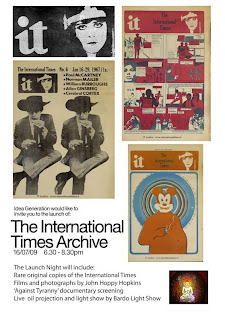 The International Times Archive was launched on Thursday accompanied by a suitably psychedelic light show over Hoppy’s photographs at the Idea Generation Gallery.

Every issue of the hippy underground bible (usually known as IT) is now available on-line with scans of each page in all their original hotchpotch glory. I’ve frittered loads of time, randomly clicking to read the happenings that attempted to focus the minds of those out of their minds since its first edition in 1966. For example, on the day I was born the freaks were watching a programme of Kenneth Anger films at the Arts Lab on Drury Lane; had something to eat at the Golden Egg on Oxford Street; and were looking forward to “a barbecue and dance with steel bands, the Action and other groups” at the Notting Hill Festival the next day.

There’s also a search facility that allows more considered research. I searched for “Reggie King” and was rewarded with a gig review all my previous investigations had failed to uncover. You can view the results in plain text or from the original page layout. The site is basic, old fashioned looking, unattractive and can be slow - like an old hippy, hey! - but it’s worth persevering.

www.internationaltimes.it
Posted by Monkey at 11:46