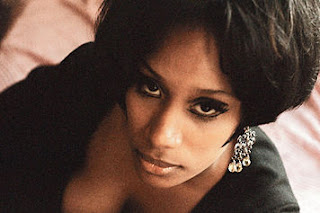 If you’d wandered in to Monkey Mansions during July, just before you heard stars you may have heard one of these:

2. Brenda Holloway – “Crying Time” (1965)
Our Brenda never cut anything less than fabulous for Motown who pissed her talent up the wall and left magical moments like this in the can for forty years.

3. The Spinners – “Truly Yours” (1966)
The lines “But the one thing I’ll never understand/ How you found the nerve to take a pen in your hand/ And sign the letter truly yours” sound more Dylan than Hunter/Stevenson.

4. Nick Drake – “At The Chime Of The City Clock” (1970)
Not the purists view but Drake’s songs were improved tenfold by adding strings and saxophones.

5. Mose Allison – “Wild Man On The Loose” (1970)
Mose lets rip on the organ, a big brassy band gallop down the road apiece, there’s a tiger in the street and a wild man on the loose.

7. The Fall – “Repetition” (1977)
When feeling particularly crotchety (and remember this is the Fall we’re talking about) they’d play this “for three hours” infuriating the punks so much they’d start fighting. Way to go.

8. Television Personalities – “Geoffrey Ingram” (1980)
The TVPs take Geoffrey from A Taste of Honey and wrap him in their quaint easy charm. “Me and Geoff got to a Jam gig, we got there too late/ The Marquee was sold out and it was only five past eight”.

9. The Campbell Stokes Sunshine Recorder – “Track One” (2009)
From the album Makes Your Ears Smile. Does exactly what it says.