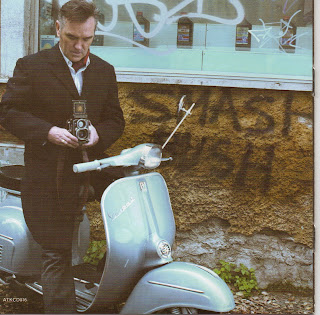 “A punctured bicycle, on a hillside desolate, will nature make a man of me yet?” I’m singing at the top of my voice. My best mate Jonny Wilks has his arms outstretched as we reel around the fountain. There’s no denying we’re mincing about. We’re walking home from school and it’s 1984.

“When in this charming car, this charming man.” A quarter of a century later and Morrissey is using the song to open his set. It doesn’t sound like mine and Jonny’s version, nor Morrissey and Marr’s. It’s like he’s joined a pub rock band on some beer crates at the back of the Swan and Bottle. Only louder. You’d think this song would kick things off big time yet the reaction is surprisingly lukewarm, not helped by the relatively obscure “Billy Budd” that follows it, nor “Black Cloud” one of the weaker tracks from the current Years of Refusal LP.

“How Soon Is Now” should be a winner, and you can dress it up with as many bangs on a giant gong as you want, but the band bludgeon all the friction and edginess out of it. Subtlety isn’t their strong point. I’d expect Smiths numbers to sound different but there’s “different” and there’s “a bit shite”. Dylan gigs are games of Name That Tune where he’s reworked, rearranged and rewritten songs with varying degrees of success. At their worst they’re interesting. Moz’s Smiths versions aren’t interesting, they’re simply bad versions. Other victims were “Some Girls Are Bigger Than Others”, “Ask” and “Girlfriend In A Coma”. Maybe I’m being too precious about them but I was praying for the butchery to stop.

Some of the blame must go to the sound engineer. Morrissey was in good strong voice, crystal clear, but the rest, especially the guitars, were a stodgy mush. For forty quid a ticket it’s not asking too much to be able to distinguish one instrument from another. But why the need for three guitars anyway?

The new tracks from Years of Refusal fared better as they’re meaty, glam-punkish affairs to begin with, although none surpassed their recorded cousins. Moz, for his part, still can’t find a pair of jeans to fit properly; still possesses that gangly awkwardness a thousand years in the business hasn’t smoothed over; and is still weighed down by the sack of spuds he carries on his shoulder due to perceived ill treatment by the beastly British music press. “How many came to review our little show? None”. Later he whinges like a moaning ninny about a previous reviewer before introducing “The World Is Full of Crashing Bores”. Rather than reveling in outsider chic it came across as somewhat sad and pitiful, like Lenny Bruce and his persecution complex.

I’ll give credit for a thoughtful set list. It was far from a greatest hits – or even recent hits – collection (what constitutes a hit these days?) with curios thrown in the small pocket of diehards at the front, eager to touch the hem of his garment, probably appreciated more than the casual fan. “The Loop” was transformed from weedy skiffle into raucous rockabilly and was the surprise highlight until the one-song encore of “First Of The Gang To Die” lifted proceedings with a welcome spring in its step.

After 25 years of not wishing to spoil my nostalgic boyhood memories, it feels like I’ve killed the golden goose. I still love you Morrissey; only slightly less than I used to.
Posted by Monkey at 21:24