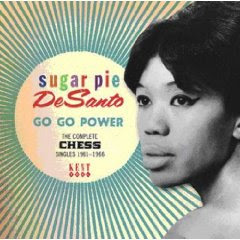 For over forty years, from the Twisted Wheel to the Mousetrap, the feisty sound of Sugar Pie Desanto as graced Mod clubs throughout the land. Many a well polished shoe has had its sole leather worn thin to the rhythm and soul shuffle of “Soulful Dress”, “I Don’t Wanna Fuss”, “In The Basement” and “Go Go Power”. Her duet, “Do I Make Myself Clear”, with Etta James remains in DJ boxes for whenever the added oomph of a sure fire classic is needed on the dancefloor.

All these and more are collected on Kent’s impressive new 24 track compilation. It’s a bit late in the day to drag up the vinyl versus CD argument but it would be remiss not to mention how different those singles sound on this CD. Much of the life digitally sucked out of them. This is obviously less apparent on the lesser heard numbers and there are plenty of those to enjoy with quality performances from both Desanto and her crack team of Chess players: the raunchy “Use What You Got”; the girl group bounce of “There’s Gonna Be Trouble”; and the polished Motown production of “Here You Come Running”.

But for all this, and the stylish booklet, it’s the inclusion of the previously unreleased “Witch For A Night” that makes this an utterly essential purchase. Recorded during the 1966 “Go Go Power” sessions, it’s a similarly upbeat stormer, and one of – if not the – fastest in her catalogue. It’s structure and overall driving force makes me think of Etta’s “Mellow Fellow” and just as that’s become a staple of Mod clubs (to the point of overplay) “Witch For A Night” would certainly be held in the same esteem had it received the release it so blatantly deserved. Stabbing horns, rolling Hammond, sharp guitar break and a rasping vocal, it’s everything you could wish for.
Posted by Monkey at 13:08