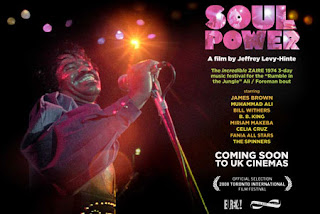 Soul Power, a new film by Jeffrey Levy-Hinte, documents the 3-day music festival held in Zaire during 1974 to compliment the Ali-Foreman “Rumble In The Jungle” world title fight.

If there’s one plane journey to have been on, it’s the one that flew the musicians from New York. Talk about unbridled excitement. James Brown, Bill Withers, BB King and whole bands of Afro-America’s finest getting down, singing, dancing and partying hard onboard. How the pilot stayed on course and resisted the urge to join them is a mystery. And when they step off the plane they’re greeted by Muhammad Ali and continue having it large on the tarmac.

Using only footage recorded during 1974, the film, apart from the occasional on-screen caption, looks like an unearthed movie rather than a new production – which is a good thing; and it’s what it is, really. There’s plenty of “going back to the motherland” and much talk of “blackness” throughout, with everyone in high spirits feeling a huge sense of freedom, adventure and comradeship. Ali was the star of ’74 and his quick wit and fierce intellect steals every scene he’s in. Going to swat a fly on his arm, he misses, “even the flies here are faster, in America, they’re too slow, too fat”. Asked whether blacks and whites were “brothers” he launched into an articulate, eloquent tirade of why they weren’t. Watching this you can’t help but feel terribly sad about how Parkinson’s has affected him. Not Parky, he wasn’t even a contender.

The film includes performances by The Spinners (who were fantastic fun throughout), Miriam Makeba, BB King, Bill Withers, Celia Cruz and the Fania All-Stars, Big Black, The Crusaders and others. As enjoyable as it was to watch once, there's too much conga slapping and bongo bashing for my taste. Finally, to a typically OTT introduction, comes Jaaaaaames Broooowwwn; the moment I’d been waiting for. He was good the 50s, great in the 60s, but peaked when he discovered the joys of the lycra jumpsuit in the early 70s. Even with his little tubby belly sticking out, he gets on the good stack-heeled-shoed foot, and turns it loose. Simply superb. But there wasn’t enough of JB. Gimme some more. With the DVD due in November, here’s hoping for some extra tracks.
Posted by Monkey at 22:57