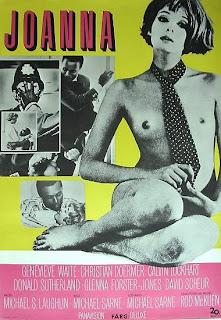 Just when you think you’ve seen every Swinging London film, the Flipside team unearths a new one to show at the NFT.

I was trying to think how to describe it, when in the Q&A session afterward, director Mike Sarne offered advice on pitching films to secure funding. Investors, he said, rarely read beyond the first full stop so you’ve got to hook them straight away with something simple they’ll like and understand. Joanna was pitched as “the female Alfie”, and in many ways it is. But before you rub your hands in glee, it’s not as good as that.

Joanna breezes into technicolour London from her grey upbringing and sets about coldly pursuing the groovy London lifestyle via a string of liaisons with rich married men, artists, Lords and shady characters before becoming pregnant. Played by Genevieve Waite, Joanna accrues a dazzling wardrobe of 1968 outfits and looks foxy in a Twiggy way but talks in a ditzy, childlike voice meant to sound cute but is actually bleeding annoying. That makes the film difficult to take seriously – not that it’s a serious film by any stretch of the imagination, yet probably has a vaguely serious message in it somewhere about the pursuit of happiness.

There are great scenes of London streets, the Southbank (including one where she bangs the wall of the NFT), a shopping spree, cool fashions, an art exhibition, and the obligatory skipping through the pigeons in Trafalgar Square moment. Any 60s film with all that is worth watching but as a cross between Alfie and Darling it falls someway short of both.
Posted by Monkey at 11:31