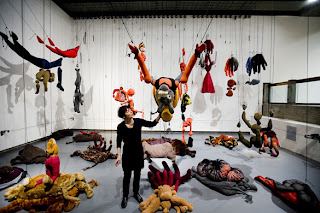 Isn’t it great when you discover something unexpected and exciting?

I’d gone to the Hayward Gallery to see The Russian Linesman exhibition curated by Mark Walinger (it was shit) and fortunately stumbled across Annette Messager’s The Messengers retrospective.

Got to admit that I’d never heard of Messager before (French, work from early 70’s to present day) but now I’ve a new favourite artist.

"Articulated-Disarticulated" is a room full of mutilated, clockwork, soft toy animals that twitch and silently moan like one of William Burroughs’ more gruesome scenes brought to life by an acid crazed Jim Henson.

There’s a display case of dead sparrows wearing knitted hats and scarves; a skull made of children’s gloves with sharp, stake-like coloured pencils jabbing out in every direction; photographs of babies with their eyes scratched out; and, a terrifying hawkish mechanical skeleton called "The Exquisite Corpse". Cheery stuff it wasn’t. Although a photograph of a penis with a cat’s face drawn on it and close-ups of men’s crotches did bring a chuckle.

Annette Messager: The Messengers @ Hayward Gallery, Southbank Centre, London until 25 May 2009
Posted by Monkey at 11:11