THE SPECIALS at BRIXTON ACADEMY 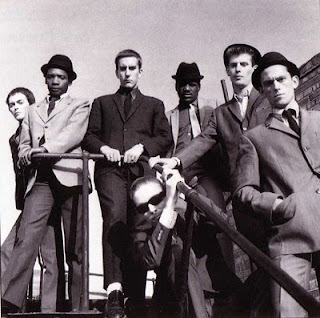 You don’t find an atmosphere like this very often. The whole upper circle are out of their seats, dancing, clapping, and chanting “Ruuuude Boys” and “Ska! Ska! Ska!”. And this is a full half hour before the Specials even materialise. Old ska chestnuts, “Israelites”, “Uptown Top Ranking” and, my word, the place went mental for “Geno”.

With a 2009 Monday night crowd partying like 1979 Friday night revellers - even down to two fat baldies having a scrap - the curtain raises to strains of “Enjoy Yourself” and the band launch into “Do The Dog”, “Dawning of a New Era” and “Gangsters”, running around like kids breaking up from school for the summer holidays. What a start.

From there they play everything you’d want: all of Specials (minus “Stupid Marriage”); much of More Specials; the other singles and various odds and sods. Pick of the bunch being “Monkey Man” (I’m not just saying that) and “Little Bitch” is a personal favourite.

As for the Jerry Dammers situation - being ousted Brian Jones style out of his own band - that’s something for the collective conscience of Hall, Staples, Golding, Radiation, Gentleman and Bradbury. But does it make any difference to the gig? Not really. Whatever their motivation, the other six plus bogus Jerry (particularly Staples, Golding and Radiation) put the graft in. A few moments of wonky timing don’t detract from a full blooded, committed performance. If money was the carrot, I don’t begrudge them a full vegetable bag.
Posted by Monkey at 18:05