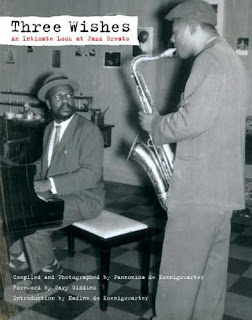 Between 1961 and 1966 Baroness Pannonica de Koenigswarter’s asked 300 jazz musicians their three wishes. These are now finally published in, appropriately enough, Three Wishes. Predictably most answered wealth, health and happiness, usually in that order, whilst others had desires more related to their profession: “To be able to play exactly what I have in my mind” (J.J. Johnson), “Somewhere to play – not a cellar. A place with dressing rooms” (Hank Mobley), and “Complete acceptance and recognition of this music as a pure art form” (Elvin Jones).

If you dig the look, if not the sound, of jazz then the hundreds of accompanying snapshots of greats and long forgotten sidemen chilling and playing in Nica’s hotel suite are hipness personified. Such was the partying that hotels would double, then treble, the rent in an attempt to oust such undesirables; not that such monetary issues concerned Nica - a Rothschild heiress - who paid up, so Monk, Mingus, Blakey, Davis et al had somewhere to hang out after gigs.

Those post-show sessions must’ve been something else. David “Fathead” Newman only had one thing on his mind: “To get high... right now. Tell you the rest tomorrow”.

“Three Wishes: An Intimate Look at Jazz Greats” by Pannonica de Koenigswarter is published by Abrams Image, priced £9.99
Posted by Monkey at 13:42