ART BRUT at THE ELECTRIC BALLROOM 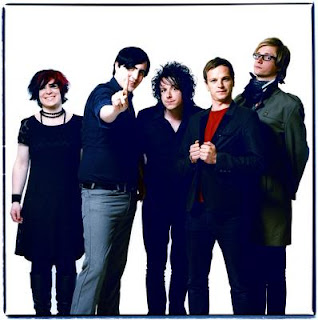 Art Brut don’t - or rather can’t - do cool. They’re a right ragbag of odd-balls (Rodney Trotter on guitar, someone from eighties pomp rockers the Alarm on another, shy looking Goth girl on bass, a camp German golfer on drums, and a pasty alcoholic reporter from the Dorset Echo singing), who’ve plundered the music cupboard, learnt enough chords to get by, and leap on the nearest stage to blast out their punky confessionals before someone susses they’re not a proper band and kicks them off. All the while making it look like it’s the most possible fun you could ever have (“Formed a band/ We formed a band/ Look at us/ We formed a band”).

In lesser hands this could be irritating, juvenile nonsense but in the sweaty palms of ringleader Eddie Argos, it’s a warm, funny and engrossing spectacle. You can’t afford to take your eyes off for a moment in case you miss some antic. Art Brut aren’t five people with heads down, knocking out their latest album and buggering off with little interaction with their audience. That interaction is a major part of their act with Argos orchestrating events on and off stage. “Ignore the set list, Art Brut, ignore the set list!” whilst throwing in adlibs in the middle of songs that already are choc block with ridiculous rhymes. Whilst lyrically fun, they keep the right side of novelty or deliberate comedy – it’s more Argos’ mocking self depreciation and willingness to reveal stuff most would sooner keep hidden, even if he unconvincingly tries to pass off the inability to get it up on a band mate.

Argos scissor kicks his lumbering carcass, rolls around, jumps in the crowd, uses his microphone lead as a skipping rope and star jumps like Iggy Pop with a cake habit. They even share a song title, but whilst Pop’s “The Passenger” is infused with dark brooding, “I ride through the city’s backside”, Art Brut’s everyman appeal sees them bellowing the joys of public transport with unbridled glee, “I love public transportation/ Train or bus, they’re both amazing!”.

Musically its bash-bash-bash, the Brut don’t go much on subtlety. Even “Slap Dash for No Cash” which is meant as a tribute to their current favourite current acts, the decidedly lo-fi Wave Pictures and Jeffrey Lewis, but turns into, in their own words, “Spinal Tap meets Motley Crue”. The rest of the set is divided between the new, return to abrasive form Art Brut vs Satan and the still-fresh sounding 2005 debut Bang Bang Rock ‘n’ Roll. The disappointingly flat It’s A Bit Complicated is only represented by a couple of songs but “Direct Hit” is one of the frequent highlights.

Live performances should be just that – performances. Saying “it was just like the record” shouldn’t be a compliment to anyone. They should be a unique, one-off events that offer something in addition to the actual songs. In Art Brut there’s a positive banquet of additional reasons to leave the house and see them. And if I wasn’t so long in tooth, I’d form a band too.
Posted by Monkey at 13:48