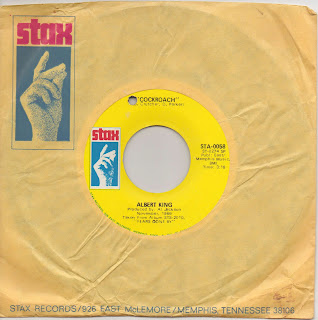 A sample of tracks that have graced the lugs during this merry month of May.

1. Lionel Hampton – “Hey! Ba-Ba-Re-Bop” (1945)
Jack Kerouac in The Early History of Bop: “Lionel Hampton had made a record called “Hey! Ba-Ba-Re-Bop” and everybody yelled it and it was when Lionel would jump in the audience and wail his saxophone at everybody with sweat, claps, jumping fools in aisles, the drummer booming and belaboring on his stage as the whole theatre rocked”. Apart from the small fact Hampton played the vibes, not the saxophone, it’s a neat description. Altogether now, Hey! Ba-Ba-Re-Bop!

2. Bobby Bland – “Farther Up The Road” (1957)
What a nice documentary that was on BBC4 this month. When I get to curate the Meltdown Festival, he’s booked.

3. King Coleman – “The Look-Key, Doo-Key” (1960)
Coleman cut a bunch of records using James Brown’s band. The mashed potato lunacy of “Loo-Key, Doo-Key” being one of them.

4. Ike Quebec – “Blues For Ike” (1961)
It takes a certain person to wear a beret and get away with it. Tenor blower Quebec not only wears it well, but looks like he’d knock seven shades of shit out of you if you even gave it a second glance. He puts in a suitably sturdy showing but its Freddie Roach’s penetrating organ that steals the show.

5. Albert King – “Cockroach” (1969)
I’m no big fan of showy blues guitarists but King effortlessly flits between smooth and sleaze on this Stax flipside.

6. The Jam – “Private Hell” (1979)
Young Weller was such a misery guts it’s no wonder he now seeks to let his mullet down in such bacchanalian fashion. This depressing tale of cynicism and repression boiled over and scorched his badger bowling shoes as 21 year old lad.

7. Camera Obscura – “Honey In The Sun” (2009)
I was told Tracyanne Campbell is the daughter of Clare Grogan. Oh, how I was that were true. It’s not but should be.

9. The Horrors – “Who Can Say” (2009)
Any move toward a shoegazing revival should be stomped out immediately, and every Eighties synthesizer should be landfilled rather than recycled, but I’m gradually thawing towards Primary Colours and “Who Can Say” in particular.

10. Manic Street Preachers – “William’s Last Words” (2009)
Nicky Wire’s vocal attempts always make him sound like one of those sad, deluded, forty-something freaks that get wheeled out for public ridicule during the auditions of X-Factor or Britain’s Got Talent. “I fink I can be as big as the Beatles”. A shaky stab at would could be interpreted as Richey’s suicide note (although reading the original text, I don’t think it’s that simple) almost brings a tear to the eye for different reasons to normal.
Posted by Monkey at 17:14