DOWN AND OUT ON MURDER MILE by TONY O'NEILL 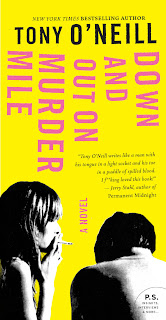 If you’ve ever considered a junkie’s life as a career choice, it’s probably best to do some research first. You could try engaging in conversation with a wizened, toothless, street corner whore, or perhaps saunter into your local crack den and say “Excuse me dear boy, but would it be an awful nuisance to teach me how to shoot up me sphincter?” Or you could take the easier and somewhat sissy way and read Tony O’Neill. The 2006 debut novel, Digging The Vein, gave a thinly veiled and disturbing (to my squeamish mind) graphic account of his Los Angeles years in the late Nineties as a heroin addict, in and out of bands, including – surprise, surprise – the Brian Jonestown Massacre.

Down and Out on Murder Mile now takes up the story with his return to London. It’s much the same routine – drugs and rock ‘n’ roll - albeit with an increased dark junky humour than Vein and a more optimistic tone.

Apart from O’Neill’s fine writing chops, it’s the dispassionate and unsentimental description of addiction that impresses. There’s no My Drug Hell or Just Say No moralising bullshit; just this is this. But but but, it's a terrible thing to say, yet I'm often kinda disappointed when "artists" get themselves together and start harping on about how the love of a good woman and having kids somehow "saved them". I feel let down. Let me continue enjoying taking "cheap holidays in other people's misery". Gosh, that's so wrong...

It may not sound like a barrel of laughs but it’s a positive rib-cracker compared to Songs From The Shooting Gallery: Poems 1999-2006. Now that’s a downer. If you want 154 pages of grim, near-unrelenting misery, then spend an hour or two with that baby.

Down and Out on Murder Mile by Tony O’Neill is published by Harper Perennial, priced $13.95.
Posted by Monkey at 20:17

Labels: brian jonestown massacre, digging the vein, down and out on murder mile, songs from the shooting gallery, tony o'neill