JAMIE REID IN CONVERSATION at the V&A 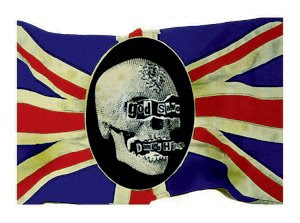 Never trust a hippie. I’d trust Jamie Reid though. For someone so closely associated with punk, he’s one heck of a hippie.

Reid began by giving a whistle-stop slide show of his work, covering the last forty years, from paintings and early collages done at Croydon Art Collage (where he met Malcolm McLaren), to the early 70’s leftist Suburban Press flyers and propaganda (particularly liked “This Week Only – This Store Welcomes Shoplifters” which were plastered down Oxford Street), to the Sex Pistols’ work, and on to the colourful esoteric stuff (shitty old crusty “healing properties of colours” claptrap).

Reid was then interviewed by Andrew Bunney. The theme running through the evening was how Reid’s political and spiritual ideals are not mutually exclusive and are inextricably – and naturally to him – linked. He was bought up with strong socialist principles and followed two generations of druids: “I’ve studied druidism but I’m not a druid”. He also somewhat unconvincingly denied being an anarchist: “To have anarchy you need to trust people, and we’re a million miles from that”. Asked how the nihilism of punk and Sex Pistols squared with his own spirituality and political views, Reid was view was that it “wasn’t nihilistic to encourage people to form bands, make music and become artists”.

The interview with Bunney made for some uncomfortable viewing and shuffling in seats. Bunney seemed so far out of his depth that Reid soon cottoned on he was more or less wasting his time, so most his answers were brief, even to the point of starting to explain something and then going “oh, it doesn’t matter”. In fairness to Bunney he probably left silences to see if any more was offered but it looked more like Bunney didn’t know where to go with the conversation. There was no flow, hardly any following up of replies, just the sight of Reid nervously scratching the underside of his jaw waiting for another question. Although again in fairness to Bunny I also wouldn’t have much of clue where to take conversations about druidism or the fact for many civilisations the year of 2012 is destined for some huge change or catastrophe: “the Olympic village under water or something” quipped Reid only half joking. If there hadn’t been two hundred people watching I’m sure one of them would have made their excuses and legged it sharpish. Both Reid and Bunney looked visibly relived when they opened it up to receiving questions from the audience.

Snippets of interest sprinkled throughout included the fact Reid is a Fulham fan (never mind) and was going to the game the next day (they won 1-0, never mind); he had made a point to never sell any of the originals of his work until he reached 60; both the V&A and The Tate now possess some of his pieces; and the famous “buses” design that was used for the Pistols, of which a signed print proudly hangs in Monkey Mansions (along with a 2009 work “God Save Damien Hirst”) was a rehash of work that first appeared in Suburban Press. And he wished people were friendlier to one another.

It only occured to me on way home I should've taken Never Mind The Bollocks to be signed. Oh well.
Posted by Monkey at 20:42