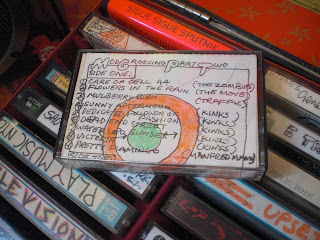 Less an exhibition and more like rummaging through a Camden Market stall from the early 90’s. Or my old bedroom.

A mass of music and pop-culture items scrunched into the tiny Chelsea Space. A Hank Williams poster and belt bucket, badges, videos, Sex Pistols flyers, Jones’s Clash stage clothes (okay, I never had any of those), gold discs (or those), weather-beaten LPs, figurines of monkeys playing instruments, homemade cassettes, music papers and fanzines, Stan Bowles painting, film stills, recording equipment, books and so it goes on.

Whereas I eventually ran out of space and stopped collecting (also began thinking “just what am I going to do with a Charlie’s Angels figure or another issue of Record Mirror just because it’s got Georgie Fame on the cover”?), Jones got himself a gigantic lock-up in Acton to store his treasure chest of goodies and now wants the public to have access to it. The Chelsea Space only has tiny fraction on display as a taster and the details of how Jones’s Rock & Roll Public Library will work are still sketchy but I can’t wait to say “I’d like to borrow Mod Grooving Part Two please”.