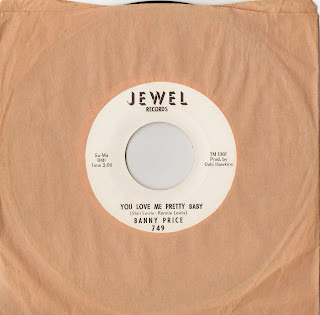 April, come she will. Some songs.

2. Arthur Alexander – “Go Home Girl” (1962)
After knocking off his best mate’s girl, Arthur suddenly has an attack of the conscience and tells her to go on home. The sly old fox.

3. Ornette Coleman – “Eventually” (1959)
From the LP The Shape Of Jazz To Come, “Eventually” is notable for a three note motif that Coleman employs ten times during his solo. You’re right – I nicked that from the sleeve notes.

4. Banny Price – “You Love Me Pretty Baby” (1965)
Taken about four, five, years to nab a copy of this brilliant bluesy dancer since hearing Roger Banks spin it at the Rocket. What strikes me now is how loaded everyone sounds on it. Price can barely slur the words out, the brass is woozy and wobbly, and when the end is in sight (after a whole two minutes) they all lose whatever concentration they had in the first place.

5. Chris Clark – “Don’t Be Too Long” (1965)
Motown recorded the backing track in 1962 and it sat there for over three years until Clark added her sumptuous, smoldering vocals. Deserved more than the flip side it eventually became (of “Do Right Baby, Do Right”).

6. The Isley Brothers – “This Old Heart Of Mine” (1966)
Talking of Motown, doubt it’s escaped your attention that 2009 is their 50th Anniversary, and all and sundry are being asked what their favourite track is. I must’ve been out when they called, so I’ll tell you anyway - it’s this. Brenda Holloway’s “Starting The Hurt All Over Again” is in second place and maybe Kim Weston’s “Helpless” in third.

9. The Rakes – “1989” (2009)
Although a bit Television and a small part Joy Division, the jagged, all-elbows sound of The Rakes comes equipped with dollops of wry observational humour serious lacking in those other miserable bastards. They’ll never match the perfection of “22 Grand Job” but, three albums in, “1989” is the closest they’ve come.

10. The Low Anthem – “Home I’ll Never Be” (2009)
Oh My God, Charles Darwin starts like Fleet Foxes, morphs into Tom Waits, and by the time it gets to track four it’s this moonshine swilling, pistol whipping, mule scaring, railroad rave-up. Yee-fucking-har.
Posted by Monkey at 13:00