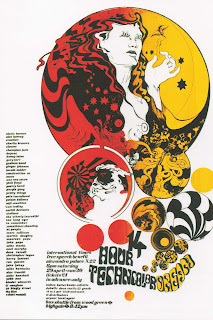 Saturday 29th April 1967 and thousands of teenage freaks, performers, artists, musicians, poets, movers and shakers from the underground, and a few bona-fide pop stars, trooped up the hill from Wood Green to the Alexandra Palace for the 14-Hour Technicolor Dream. Fourteen hours of truly legendary psychedelic shenanigans.

Who were these people? Where had they come from? And what had led to the UK’s most famous “happening” of the Sixties? Stephen Gammond’s DVD documentary delves into the underground and attempts to glean insights from, amongst others, Barry Miles, Joe Boyd, Kevin Ayers, Phil May, half of Pink Floyd and, most significantly, John “Hoppy” Hopkins.

The story of the UK underground is also Hoppy’s story. As Pete Jenner, the early Floyd manager, says: “Without Hoppy there would have been no underground”. In tracing the trip from the CND marches of the early ‘60s; to the foundation of the London Free School (a gallant attempt to educate and integrate the new communities around Notting Hill); to packing 7000 people in to the Royal Albert Hall for a drunken Beat poetry reading; to establishing the International Times newspaper; to running the weekly UFO Club; and to the inevitable sex, drugs and rock ‘n’ roll, Hoppy was the one constant throughout.

It’s the coverage of these events in A Technicolor Dream that provide the most rewarding parts of the film; mixing old footage, new interviews and a stirring soundtrack by the Pretty Things and the Pink Floyd. Although a familiar tale to anyone who’s read the memoirs of Barry Miles or Joe Boyd, it is well told and captures the essence of a wonderfully idealised period where music and literature and politics and poetry were all equal parts of a magical mix. An ebullient Pete Jenner still has trouble containing his excitement. “The ‘60s marked that break with the Victorian heritage. Piss off, Victoria!”

As the film continues it increasingly becomes the Syd Barrett and Pink Floyd story. They were, of course, an intrinsic part of the underground, performing at benefits for the London Free School at the Roundhouse and for International Times at the 14 Hour Technicolor Dream but, for me, they get a disproportionate amount of screen time. Much of it is near identical to the BBC’s 2001 Barrett documentary and neither Nick Mason nor Roger Waters offer anything of particular insight. Mason is ambivalent about their contribution to any scene; whilst Waters claims, at best, to not recall anything (“I have no memory of the underground at all. When people talk about it, I have no idea what anybody’s talking about”) or, at worst, is dismissive (“I couldn’t give a shit who Love were. I really wasn’t interested in music”). But it’s easier to sell a Syd Barrett story than a John Hopkins story. Still, the Floyd looked great, sounded great, and I could watch footage all day long of Barrett skipping through the fields playing with a scarecrow.

But as the spaced-out flower children blinked into the Sunday morning of 30th April, the party was almost over. The summer of love would soon turn to winter; imprisonment removed Hoppy from circulation; Barrett could no longer function in his own band; and the bright mood of ’67 darkened throughout ’68. But for one brilliant, technicolor moment, there could not have been a better place to be in the world than high on the top of a North London hill.

A Technicolor Dream is an Eagle Vision release. See www.atechnicolordream.com
Posted by Monkey at 11:38