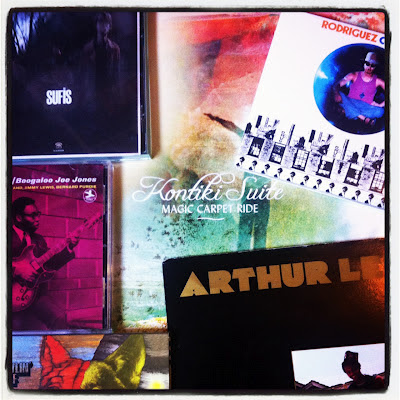 Pleased to report this month’s playlist is evenly split between the old and the new.

1.  Kenny Lynch – “Hey Girl” (1965)
This never gets mentioned in the same way as “Movin’ Away” but it has a similar feel and is almost as good. Beautiful production, string arrangement, and Lynch sounds more Chicago than Stepney.

3.  Rodriguez – “Crucify Your Mind” (1970)
I first heard this in the new film about Rodriguez, Searching For Sugar Man, yesterday. I walked out of the cinema, straight to the record shop, and have played it twenty times since. (Listen).

4.  Howlin’ Wolf – “If I Were A Bird” (1971)
The Wolf’s second attempt to connect with the psychedelic heads came with his Message To The Young LP (“If you wanna wear short skirts, go ahead, I won’t mind”). It’s not as way out as Muddy Waters or Bo Diddley’s similar efforts but is a strong electric blues LP and in no way “dog shit” like he considered The Howlin’ Wolf Album that preceded it.

5.  Arthur Lee – “Love Jumped Through My Window” (1971)
Arthur alone with his guitar. I met him once. He wasn’t very friendly. Maybe he’d heard The Electric Fayre’s version of “My Flash On You” or our own “Arthur’s Song”. To my friend he said “get out of my face”. I’m still jealous. Love you Arthur.

6.  Two Wounded Birds – “Together Forever” (2012)
Pitched between the Ramones and the Vaccines (but don't let that put you off), two minutes of unbridled surfin' fun, fun, fun.

7.  Beachwood Sparks – “Forget The Song” (2012)
From the opening strum, the pedal steel, the vocals, the harmonies this is heart melting stuff off album of the year contender, Tarnished Gold.

8.  Kontiki Suite – “Magic Carpet Ride” (2012)
Not the Steppenwolf song but unhurried, dandelion blowing psychedelia. Their other songs are even better which officially makes them the Monkey Picks British Band To Watch when their debut LP lands shortly.

9.  The Sufis – “Lemming Circle Dance” (2012)
The first couple of tracks on The Sufis album sound like The Piper At Their Satanic Majesties Gates of Dawn Request, which is fine, but then their own personality shines through with this far more interesting and experimental wig-out.