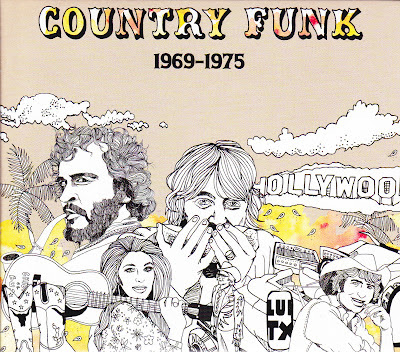 Have we had Country Funk as a genre before or is it the latest creation to shift neglected back catalogue by marrying two together? I think we've had it previously (even a band called it) but thankfully we haven't now gone down the route of joining parts of the words together to make Counk or Funktry. (Hmm, I quite like the sound of Funktry). It’s the job of record companies to make their product marketable so credit to the ever-reliable Light In The Attic Records in pulling together a solid compilation that unearths some surprises and is worth the money.

The artists come from range of backgrounds yet hit a similar low-down groove, not ever considering what it would be called and often different to the style they’re best associated with. This isn’t James Brown funk, and it’s not pedal-steel country either, more a funky kinda attitude, but more suede than sequins. Dale Hawkins’s opener, “L.A, Memphis, Tyler Texas” is a perfect example of meshing styles together: stabbing soul stew horns and southern style vocals. Bobby Darin’s lazy sounding drawl on the shuffling “Light Blue” is light years from “Mac The Knife” and is driven by a fat bass line reminiscent of Aaron Neville’s “Hercules” or something from Superfly. Link Wray’s incredible gospel shouter “Fire and Brimstone” sounds nothing like the guitar rumble than made his name and as I’ve said before I can’t hear it without imaging Bobby Gillespie flapping his outstretched arms in ecstasy.

The drumming on Tony Joe White’s “Studspider” is breakbeat material with Tony even a one point coming close to turning into a human beat box. “Piledriver” by Dennis The Fox is taken from the same stream with Dennis coming on like a baggy Lee Hazlewood. Johnny Jenkins “I Walk On Gilded Splinters” is familiar but “Hawg Frog” by Gray Fox takes the gumbo further.

Out of sixteen tracks there isn’t one that needs skipping. Not all are essential but they make for repeated listening and if there’s a volume two I’m riding in quicker than a horse in a star-spangled rodeo.