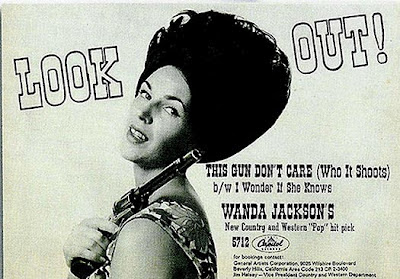 So there I was, stood at the front of the stage. One mod among hundreds of rockabillys. For the first time in my adult life I felt like a man from the future instead of the past. These weren’t withered old geezers with ten-strand quiffs either but an almost entirely new generation: early 20s, female, and immaculately turned out in 50s lipstick, powder and paint. Easily the best looking audience I've seen for many a long year.

This is good news for Wanda Jackson, although equally well known for her country sides it’s wearing her Queen of Rockabilly/Rock 'n' Roll crown that draws the UK crowds. To be able to see her perform in 2012 is in remarkable. Far be it for me to disclose a lady’s age but by her own admission on she cut her first record 58 years ago; hadn't heard of Elvis was when she first toured with him (soon got to know him though, and still has his ring); and didn’t even know what Rock ‘n’ Roll was when she first made it, knowing it simply as “that new music like Elvis sings.”

Wanda was sassy and ballsy back in the 50s and wild records like “Let’s Have A Party”, “Hot Dog” and the outrageous “Fujiyama Mama” displayed a fiercely determined streak. On Thursday that was still in evidence as a throat infection prevented her from singing the way she wanted but she battled through; always pushing herself, not chickening out of the more vocally demanding songs and encouraging her band to play louder, play harder, “blow me off the stage” she urged.  Through sheer force of personality – which she had by the bucket load – she turned in a hugely enjoyable show, chatting easily with the audience without once sounding like slick showbiz patter. And when she dropped her voice to the lower notes her unmistakable growl was still there.

It’s always heartening when acts, regardless of age, keep moving forward and the selection of tracks from her 2011 album recorded with Jack White sat well with the classics; Amy Winehouse’s “You Know That I’m No Good” was inspired. The LP is The Party Ain’t Over. It sure ain’t.

Setlist: Riot In Cell Block #9, Rock Your Baby, I Gotta Know, Funnel Of Love, I Betcha My Heart I Love You, Good Rockin’ Tonight, Heartbreak Hotel, Shakin’ All Over, You Know That I’m No Good, Like A Baby, Fujiyama Mama, Mean Mean Man, I Saw The Light, Let’s Have A Party, Whole Lot of Shakin’ Goin’ On.
Posted by Monkey at 18:00