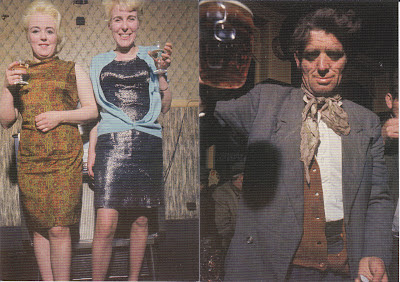 David Bailey is yer archetypal East End Boy Made Good.  His mother was from Bow; his father Hackney; grandmother Bethnal Green; and he grew up in East Ham which, if you’re asking me, is pushing the definition of the East End but that’s a whole other discussion, and as many photographs in this exhibition were taken in Canning Town and Silvertown, the area in question is the broadest one the term allows.

The photographs are in batches: early 1960s, late 1960s, the 1980s and 2005-2010. Together they make the East End look a miserable, rundown, poor and mostly inhospitable place. I’m a little tired of seeing endless images of dilapidated properties, smashed cars and dirty faced kids kicking through the rubble but Bailey’s earliest images here – sharp focus in black and white - undoubtedly show what Whitechapel, Shoreditch and Spitalfields were like and also demonstrate how studiously the young photographer was in learning his craft. The selection taken around the closed docks during the 1980s have a similar feel, best summed up by one photo of a pub on the corner of the charmingly named Shoulder of Mutton Alley, E14.

The more interesting pictures are those taken during 1968 in the Rio Club and neighbouring pubs and clubs.  Shot in grainy colour they show drinkers in drab, dark and - judging by their coats - cold environments with jugs of flat beer placed on cheap Formica tables. It is only when the cocky photographer says “’Ere are girls, one by the jukebox” do they raise their glasses and crack a smile. By contrast, Ronnie and Reggie in their sharp suits playing with pet snakes found plenty to laugh about, little did they know their well-cut collars would shortly be felt for the last time. My favourite picture is of a young barman, with his greased hair and sailor tattoos, pre-empting the look amongst the area’s hipsters forty-five years later. This remember, as the media keep telling us, is now “London’s trendy East End”. This guy though, with seemingly half the stock from the nearby Tate & Lyle sugar factory behind him, was for real.

The area isn’t for everyone, much of it is still a shithole, but I’ve lived here since the 1990s and love it, despite the boroughs of Tower Hamlets, Hackney and Newham which make up the East End have some of the highest levels of poverty, deprivation and people seeking benefits in the country. In a café on Bethnal Green Road last week the owner asked a customer if he liked living here. He said he did and it was ironic his parents spent years trying to get out, only for him to move back in. Being fortunate to have enough money to get by, to live here by choice, enjoy the good and avoid the darker side of the place undoubtedly make our perception and experience different to that of some of the locals.

It’s a shame Bailey’s photographs don’t reflect the more positive changes over the period. There’s an unremarkable 2009 image of the milk suppliers on Hackney Road with the gas works in the background. There’s snow and sludge on the ground and it looks like an entry in a Worst Postcard competition.  Yet 200 yards down the road is the lovely Hackney City Farm, 250 yards is Columbia Road flower market and rows of independent shops and galleries, 400 yards away is a Shoreditch night-life unrecognisable from his 1961 pictures. Or perhaps a visit to Broadway Market where a loaf of artisan organic quinoa bread won't bring much change from a fiver (not that I'm convinced that's necessarily a good thing). I know he isn’t employed to drum up trade and visitors, nor is Bailey a journalist, but it would offer more balance than yet another photograph of tatty bric-a-brac stuffed in a shop window.