THE CHOCOLATE WATCHBAND IN SHINDIG! ISSUE 27 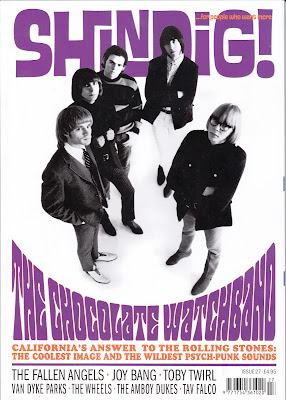 When one reviewer remarked that the artists featured in Shindig! didn’t always warrant such lengthy coverage the editors got a right bee in their beards. I sympathised with the reviewer as I can’t be bothered reading ten pages about bands who made a couple of records and trot out familiar stories about once supporting the Jimi Hendrix Experience at the Grimsby Town Hall on a wet Wednesday. Mind you, I’d happily read 5000 words from Reggie King’s barber or the Sky Saxon’s dog sitter, so it’s strokes for folks I guess.

Nobody though interested in Shindig! will begrudge the Chocolate Watchband their twelve pages and superb front cover photograph this issue. Their slightly confusing story has been told before but they’re garage punk royalty with enough spectacular songs you need the fingers on both hands to count them, so they’re entitled to tell it again. If the Rolling Stones took blues and rock ‘n’ roll from America to Britain and sold it back to the yanks, the Watchband added their magic and slung it - indirectly - back at us limeys, although it would take years for us to cotton-on to their nuggets. Their songs, clothes, attitude, mystic and sideburns were some of the reasons I wanted to be in a band. I was thrilled to met singer Dave Aguilar backstage in 2005. For some reason, after waiting patiently for his autograph, I decided to ask him at the precise moment he dropped his trousers. “Hey man, can you just wait until I put some pants on?” he said, quite reasonably. See below, with pants.

Elsewhere there are features on The Fallen Angels (which I won't read); The Wheels (which I might); an old squeeze of Keith Moon’s, the actress Joy Bang (which I have, read I mean); and an amusing look at Toby Twirl who discovered that Stockport gigs were filled with pensioners more interested in pie and mash than hipsters flickering their fingers through liquid light shows.

The best issue I've bought for a while. Available here and there for £4.95. 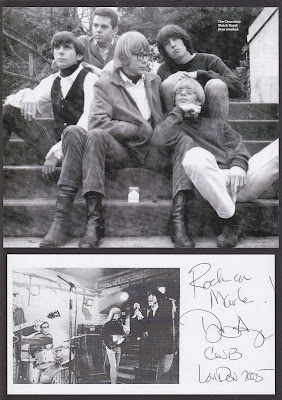