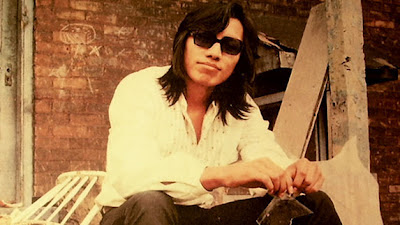 The less you know about the Mexican Detroit musician Rodriguez before you watch Malik Bendjelloul’s Searching For Sugar Man the better. The people of South Africa didn’t know anything about him either yet his 1970 album Cold Fact was massive there.  In America his record company suggest it sold six copies but to the hip South African white kids he was an inspiration: bigger than the Stones, bigger than Elvis, selling around half a million dodgy copies after a girl brought it into the country to play to her friends who made copies and their friends made copies.  Despite that he remained a mystery. There was no information available other than he was believed dead. The circumstances depended on who was telling the story: from a plain and simple drug death, to setting himself on fire, to shooting himself in the head on stage.

Malik Bendjelloul’s Searching For Sugar Man tracks the search for Sixto Rodriguez. I’m not going to write much more other than to urge you to see this film. His beautiful, poetic music alone will blow you away (he stands toe-to-toe with period Dylan, Simon & Garfunkel, Arthur Lee, Nick Drake) but as his story unravels Rodriguez becomes even more remarkable. Don’t research him first, just watch the film. Those of an emotional nature may wish to have a hanky handy; I can’t listen to “I Wonder” now without welling-up. If you aren’t a fan already, I promise you will be.

Searching For Sugar Man, directed by Malik Bendjelloul, is in cinemas now.
Posted by Monkey at 16:47