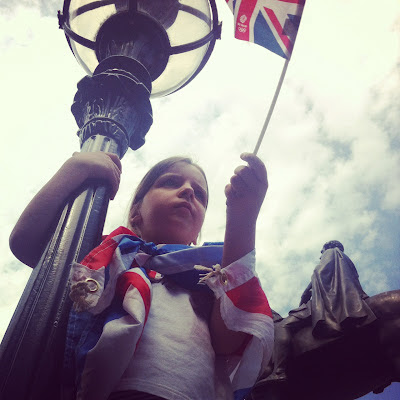 So that’s London 2012 over and the new sense of national pride from the opening ceremony (Say It Loud) thankfully carried over for the rest of the tournament. Yesterday I went to the men's marathon (with young friend of MonkeyPicks Ruby T pictured above) and although that was the only event I witnessed live it was a great to stand with spectators of many nationalities cheering on all the athletes. Well done to gold medalist Stephen Kiprotich from Uganda who whooshed past me after 5, 13 and 21 miles. Most days though were spent in Victoria Park near the Olympic Village, watching sports I'd usually have no interest in on big screens; bouncing on Jeremy Deller's inflatable Stonehenge; being chasing by hungry dinosaurs; witnessing blokes in y-fronts escape from straight-jackets; or sitting on the grass, pint in hand, listening to bands on the music stage. Geno Washington relished his stint and his infectious personality and frequent references to dipping into his soul pot won me over; Soul II Soul had me briefly indulging in a spot of appropriate 80s style dancing - I was a bit tipsy and still giddy with excitement from Mo Farah smashing the 10,000m; Courtney Pine was too keen on audience participation for my liking but played a track that sounded like mating foxes which I nodded sagely to; and Natty Congeroo and the Flames of Rhythm swung nicely as families inadvertently sang along to tales of scoring opium from China Town. After last year’s riots Britain was never the hellhole it was painted and these Olympics haven’t made it heaven but the majority seemed to embrace it (many to their surprise) and draw inspiration (or at least admiration) from the hard graft and dedication of the athletes.

Whether London 2012 leaves any enduring legacy or how long the current feel-good factor lasts remains to be seen (I could feel it draining away through the closing ceremony until The Who finally ended it on a high). The love many of us feel now may turn out to be nothing more than a holiday romance, but if that’s the case, it has been the best holiday romance ever.
Posted by Monkey at 19:14