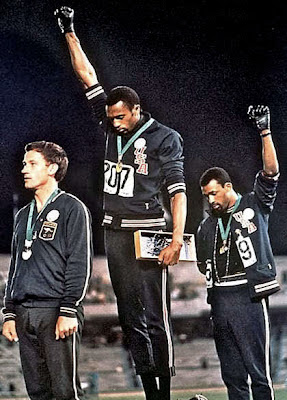 Missing the Olympics? Then here’s a quiz question: Name the white 200m silver medallist who stood with Tommie Smith and John Carlos as they conducted their Black Power salute at the 1968 Mexico games. If you were watching the BBC before Thursday’s 200m final you’ll know the answer is Peter Norman. By coincidence that was the day I watched Salute, a timely new DVD telling of the events that led to that historic moment and of the repercussions.

The current marketing of Salute (originally released in Australia in 2008) implies it’s a film about the three men and although all give extensive interviews, together and separately, and have an unshakeable historic and personal bond, it was made by Matt Norman and its focus is on the often overlooked one, his uncle Peter. Rather than Peter Norman being an unwitting accompanist in events, it’s Carlos’s belief that it was God’s will to put them all on earth for that moment. “It was destined to be me” said Peter.

Amid the violent civil rights struggle of 1968, black American athletes threatened to boycott the games as advocated by the Olympic Project For Human Rights. White America gladly allowed these athletes to represent their country – and win medals for them - but not eat in their restaurants and use their washrooms.  As Norman notes, boycotting the games would’ve taken away the platform the athletes had to raise awareness. Also if they hadn’t competed the media and public would have accused them of being un-American and of turning their back on a challenge. Mexico itself had witnessed student riots in the weeks before the games; reporting had been minimal but Carlos now believes 2000 people were killed.  With that tension in the air athletes were told not to make any political protest and given warnings of death threats against anyone considering one.

After the fastest 200m race in history, Smith and Carlos planned their black glove protest but when Carlos left his gloves back in the village it was Norman who suggested they wore one each. He in turn wore an Olympic Project For Human Rights badge on his tracksuit in solidarity. Behind Peter Norman, Tommie Smith took a deep breath, bowed his head, raised his fist and John Carlos followed to the stunned silence of 80,000 people in the stadium and the watching world.

Smith and Carlos were banned from the Olympics for life. Destitute, Smith washed cars and Carlos’s first wife tragically took her own life under the pressure. When Norman qualified for the 1972 games, and was ranked fifth in the world, Australia decided – for the first and only time – not to send any sprinters to the Olympic Games. Even when Sydney hosted the Olympics in 2000, Norman was the only Australian Olympian not invited to represent his country in any official capacity. It beggars belief. Incidentally, his 1968 silver medal time would have been enough to secure gold in 2000.

Peter Norman called Smith and Carlos heroes in sacrificing personal glory for the good of the cause. He himself wanted to be thought of as "an interesting old guy". When he died in 2006 Smith and Carlos both read moving eulogies (“My friend, Peter Norman, the humanitarian, who believed right can never be wrong”) and carried his coffin.

Salute by Matt Norman is released on DVD by Arrow Films.
Posted by Monkey at 16:43