TAKING CANDY FROM A DOG (2nd PRINTING) by VIC TEMPLAR 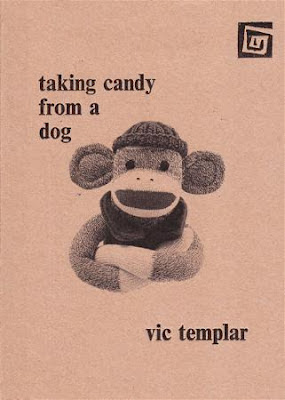 Two years ago I championed Vic Templar’s debut novel Taking Candy From A Dog so I’m very pleased that after selling out the initial run it now has a second printing.  From a personal point of view it’s an honour to see a quote attributed to me on the back cover of the new edition.  It reads:

“Vic Templar’s Taking Candy From A Dog is the part memoir, part fiction tale of a very ordinary boy, living a very ordinary life in a very ordinary part of Kent, yet it is also one of the most touching and hilarious books you could read about life as a child.  It is warm without being cloying and funny without being too knowing.  It is a tale of picnics, wasps, summer that lasts forever, Wimbledon, Fred Perry, the Buzzcocks, Gillingham FC and family life in the 1970s.”

I stand by those words, even if they’re not mine.  Which they’re not, they belong to writer Iain Aitch.  I only noticed today when reading back my own review.  Iain’s quote on the cover is actually mine and for which Iain is now going to have to live with and try to explain away.  He’s a proper writer for daily newspapers, has published books (We’re British, Innit) and has been on the telly and stuff.  I hope his career doesn’t suffer being associated with:

“Written through the eyes of a frequently bemused and incredulous child/teenager, with the chapters interspersed by the savvy interruptions of a sock monkey, it sounds twee, cheesy and to be avoided but it’s far from it – Taking Candy From A Dog is one of the funniest books I’ve ever had the pleasure of reading.  Wonderfully told with keen detail and dry wit, some of the dialogue had tears of laughter streaming down my face.”

As you can see they come from a similar place and for once you have someone corroborating my opinion.  So, read my original review here, get on to Blackheath Books for a copy, make it sell out, make Vic happy, and for the third printing Iain and I can have our own words back.  Everyone's a winner.