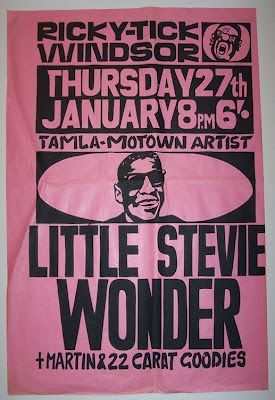 The M word has featured heavily during the last ten days or so, here's a look back.

I can’t recall the last time I saw a club advertised as a mod club and The Sidewinder in Islington doesn't, but that’s what it is.  Tucked away in a fabulous club room within the Wenlock and Essex, Essex Road, N1 on the first Thursday of each month it manages to be a relaxed affair yet still entice people on to the illuminated dancefloor with its soul, jazz and R&B soundtrack.  The highlight for me there this week was chatting to Martin Fuggles, who was the DJ at the Ricky Tick Club in Windsor during the mid-60s.  There were a number of Ricky Tick clubs but the Windsor one, in a mansion by the river, is regarded as the main one, and the one replicated in the film Blow Up when The Yardbirds tore it up.  Martin would DJ on two turntables built inside a gold painted piano, a playlist dominated by the Motown, Atlantic and Stax releases he’d purchase each week from a stall in Slough. Martin said he’d been reintroduced to the mod scene a couple of years ago and was now enjoying trying to catch up on what he’d missed and seeing how things had developed in his absence.  He still has all his old records but had lost interest in music once Pink Floyd had come along, saying if that was the future of music he wanted no part of it.  We chatted about what sounds were popular at the time and I asked him about The Impressions, to which he pulled a great OH MY GOD, THE IMPRESSIONS sex face.  This was exactly the reaction I’d hoped for.  He often began his sets with “It’s Alright” and would buy half a dozen extra copies of their records to sell down the Ricky Tick.  He also said that their gig at the Barbican last year was the second best gig he’d ever been to (one behind Buddy Holly and the Crickets).  The group are playing at the Jazz Café in London next month and if at all possible you must go.  To read me becoming all emotional about the Barbican night click here.  Naturally I tried digging for info about The Action but although he knew they’d played the club he couldn’t remember anything in particular about them.  Damn.  Martin certainly considered himself a mod back, complete with scooter, but soon learnt “you needed four wheels if you wanted to pull the better birds”, and carry your records of course.  It was fascinating chatting with him and hopefully he’ll be on at Sidewinder in the future.  His Ricky Tick site has more news and more posters like the one shown above.  The next Sidewinder is on Thursday 5th July.

The launch party at the Fred Perry shop in Covent Garden for The A-Z of Mod book by Paolo Hewitt and Mark Baxter was a swinging affair with some well-known scene faces in attendance and even Phil Daniels popping by.  Luckily for him by the time I’d had enough to drink to recite chunks of Quadrophenia  – because he would have loved that – he’d disappeared.   It wouldn’t be right to review the book in detail as it was a birthday present for Mrs Monkey by Monkey Snr so try the one in The Guardian and work it out for yourself.  There’s a picture of Mrs Monkey and her sister in the book adopting their usual Kray twins stance - looking like they’d slash your throat with their haircuts if you stood too close. On the off-chance they read this I should add they aren't quite as menacing in real life.

Also in Mrs M’s birthday haul was The Treasures of The Who by Chris Welch, a hardback, boxed book containing memorabilia inserted into the pages.  There are some great reproductions of Marquee contracts, posters, flyers (cool one from the Goldhawk “Beat” Club where The Who played Good Friday 1965 and The Boys played on Saturday), an early letter to fan from Roger Daltrey and a postcard from Keith Moon.  It sells for twenty five quid but was a lot cheaper in Fopp or a bit cheaper from that on-line retail place.

On the subject of Keith Moon, keep your eyes open for a summer publication of Full Moon by Dougal Butler.  Original published in 1981 by Moonie’s personal assistant, with Chris Tengrove and Peter Lawrence, it's utterly hilarious in places and terribly sad in others.  I remember tears of laughter streaming down my face when I first read it when published as Moon The Loon.  Find out more at Full Moon The Book.
Posted by Monkey at 10:22