THE LOVELY EGGS at the HEAVENLY SOCIAL, LONDON 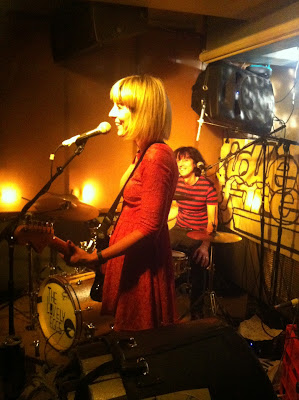 The Lovely Eggs were on fab form last night crashing through a set that’s increasingly feeling like a greatest hits package thanks to a strong run of recent singles.  That's greatest hits in my universe based on airplay in Monkey Mansions rather than the hit parade, if there is still such a thing. “Allergies”, “Food” and "Fuck It" are great but there still hasn’t been a better single in the 21st century than “Don’t Look At Me (I Don’t Like It)”. Had a little chat with Holly and David after I'd DJed and they were indeed Lovely Eggs. "Why didn't you play at our wedding?" they asked. Funnily enough, and I didn't tell them this, but me and Mrs Monkey thought about asking them to play at ours last year. "People Are Twats" would've gone down a storm. Thanks a lot to promoter Darren at Idle Fret Records for another well organised night; for letting me spin some suitable records alongside Ian from Art Brut; and for nabbing the wonderfully drawn set list.

The Lovely Eggs played (plus an encore of "Panic Plants"): 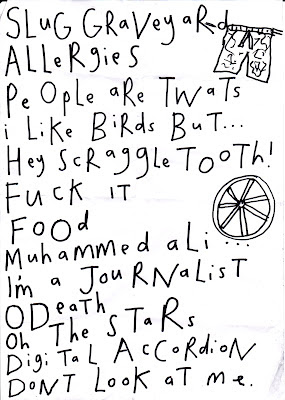