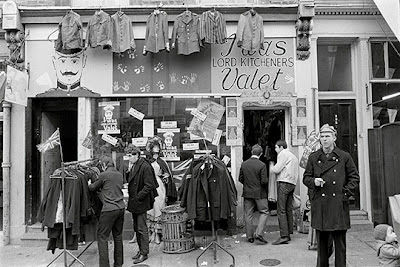 UK readers, you are in for a treat; non-UK readers, turn away now unless you can somehow manage to wangle access content on the BBC i-Player.  MonkeyPicks enthusiast Richard Turnham alerted me to a host of old London documentaries on the site, many not seen since first broadcast.  If Richard had his own blog (and he should) he’d be telling you about this himself rather than see me tap the ball in over the line after his mazy dribble from the half way line.

Three Swings On A Pendulum is a black and white 47 minute documentary investigating whether London really was the Swinging capital of the world.  First broadcast on 8 June 1967, an Australian, a Frenchman and an Afro-American hope to find out as they traipse around chatting to Londoners, visiting strip clubs, Carnaby Street, Mod Male, Portobello Road, I Was Lord Kitchener’s Valet (photo above by Philip Townsend), bookshops before checking out a Herbie Goins and the Night Timers gig.  It looks brilliant to me but the trio look down their noses with a frightfully sniffy attitude to everything they encounter.  Mrs Monkey was far from impressed with their squareness.  “It’s the 60s, just enjoy it, you bunch of cunts”, was her considered opinion.  Mrs M should have her blog too.  At least one young man they spoke to shared that opinion although chose to word it differently, “When you’ve got the threat of nuclear war hanging over you, let’s live for the present, damn it”, even an old bloke in his in his mid-70s agreed, “We’ve got to go on haven’t we?  Not go back. There’s new vogue coming in, I’m all for it myself.”  The footage, especially the shops stuff is fantastic and makes such a change from the usual stock footage of that bloke with the frizzy hair and granny glasses.

In stark contrast is One Pair of Eyes: Who Are The Cockneys Now? which follows singer and actress Georgia Brown in 1968 as she revisits her childhood Whitechapel home and the East End she grew up in, and in particular looks at how the area was changing as the Jewish community were making way for a new immigrant population.  Lionel Bart makes an appearance cruising along in a Rolls Royce and Georgia pops in to catch on her old youth club friend Vidal Sassoon but the three of them look like they now belong to a different world to the majority of the people wandering the dilapidated streets.  It’s interesting that if Georgia turned up there today in her beehive and expensive leather coat no one would bat an eye.  The area is now packed with small independent shops and an air of trendiness making it London’s modern day Carnaby Street but who are the cockneys now?  I doubt many that technically are would even acknowledge the word.

There are other similar features, if you can work out how to navigate the confusing BBC’s site, under the London Collection heading.  To save too much trauma click on Three Swings on a Pendulum and One Pair of Eyes: Who Are The Cockneys Now?.  Gertcha.
Posted by Monkey at 09:06

Labels: films, georgia brown, london, one pair of eyes, three swings on a pendulum, where are the cockneys now