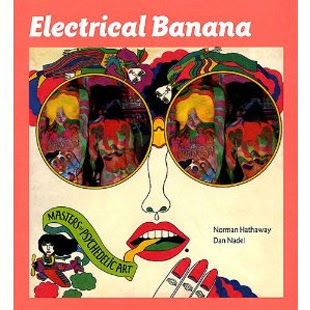 In his foreword to Electrical Banana Paul McCartney comes close to claiming the Beatles invented psychedelic art. He’s a cheeky sod but few would argue the animation of Yellow Submarine is one of the most familiar examples of the genre. That was in fact the work of German illustrator and designer Heinz Edelmann, who notes “even in America it was believed the Beatles had created it themselves”.  He’s not bitter but is dismissive of the concept and clichés of the then emerging style. “I’m allergic to a few things in psychedelia: disembodied eyes and disembodied lips”.

Edelmann is one of seven exponents of a loosely connected style whose work, along with new interviews, features in a suitably colourful and well produced new book.  Disembodied eyes and lips were the stock in trade for Martin Sharp. His posters for Oz; his album sleeves for Cream; his Roundhouse flyers; even the hallway in the film Performance looked and smiled from all directions.  Dudley Edwards painted furniture; shop interiors and exteriors; Paul McCartney’s piano; as well as cars, including the Buick the Kinks posed with. Marijke Koger was a quarter of the art group The Fool that designed sleeves for The Move, The Incredible String Band, their own record and, most famously, the mural on The Beatles ill-fated Apple shop. Keiichi Tanaami isn’t a name I was familiar with but his sharp pop-art collages are my favourite pages in Electrical Banana. Mati Kalrwein designed Miles Davis’s Bitches Brew and had strong yet intricate style. Finally, Tadanori Yokoo is another artist who didn’t see themselves as psychedelic but whose use of colour, collage and garish fantasy fits the bill like a pair of velvet loons.

Electrical Banana: The Masters of Psychedelic Art by Norman Hathaway and Dan Nadel is published by Damiani, priced £27.