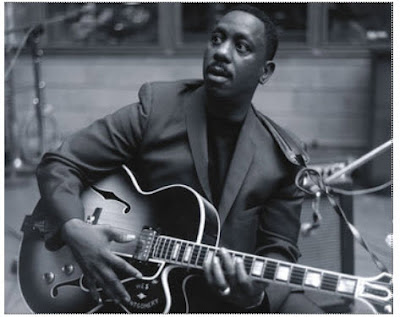 This month’s trawl through the sounds currently rocking Monkey Mansions.

1.  The Ravens – “Rock Me All Night Long” (1952)
Jimmy Ricks’s big bass voice was one of the most instantly recognisable in doo-wop.  When he wanted rocking, he wanted rocking. This track is taken from a splendid new compilation on Bear Family Records, Street Corner Symphonies. The Complete Story of Doo Wop Volume 4: 1952.

2.  Wanda Jackson – “Tongue Tied” (1961)
It is difficult to choose between Wanda’s rockabilly sides and her country sides but this puts forward a case for the former.

3.  Wes Montgomery – “Besame Mucho” (1963)
For me, what separates jazz guitarists like Wes and Grant Green from their rock counterparts is they understood space and time.  Wes’s crazy flipper fingers do tons of work yet there’s room to breathe between the notes and I can’t imagine him going all squinty eyed and grimacing whist he’s doing it. Featured on his rather good Boss Guitar LP with Mel Rhyne on Hammond and Jimmy Cobb on drums (jazzers like to name the whole band).  Muchos besos para Wes.

4.  Oscar Brown Jr – “Forty Acres and a Mule” (1965)
Brown recalls learning in school that all freed slaves were entitled to forty acres and a mule.  Now he wants his.


5.  Jackie Mittoo – “Get Up and Get It” (1969)
Mittoo started out playing piano in the Skatalites before becoming musical arranger for Jamaica’s Studio One recordings.  “Get Up and Get It” is firmly in the funky-soul-jazz territory occupied elsewhere at the time by Booker T. & The MGs and The Meters.

6.  Bond and Brown – “Scunthorpe Crabmeat Train Sideways Boogie Shuffle Stomp” (1972)
Graham Bond made Two Heads Are Better Than One with Pete Brown and is, as this title suggests, a doolally jazz poetry affair.  It would be his last LP and a suitably bonkers one to leave on.

7.  J.P. Robinson – “George Jackson” (1972)
In April’s Playlist I raved about Bob Dylan’s original version but hot on its heels came this soul stirrer.  One of the best Dylan covers I’ve ever heard.

8.  The Who – “The Real Me” (1973)
If you missed Can You See The Real Me? The Making of Quadrophenia on the telly last night you missed a treat.  Far from covering old ground about the record there was rarely seen live footage, new interviews with Townshend and Daltrey, old clips of Entwistle and Moon, Pete revealing notes and letters from his archive, interviews with some of the kids featured in the album booklet, Irish Jack revisiting the Goldhawk Road Social Club and loads more including Mark Kermode helpfully explaining what a double album was.

10.  Crass – “Poison In A Pretty Pill” (1981)
When Jonny Wilks and I walked home from school we’d either sing Smiths albums from start to finish or repeat the title of Crass’s Penis Envy LP in as many ridiculous voices as possible.  I only heard the record for the first time this week.  Me and Jonny took great delight in serenading Ickenham residents to Morrissey’s “You can pin and mount me like a butterfly”; I’m sure “I want to rape the substance of your downy hair” would’ve gone down just as well.
Posted by Monkey at 20:23