THE PRIMITIVES at the BORDERLINE, LONDON 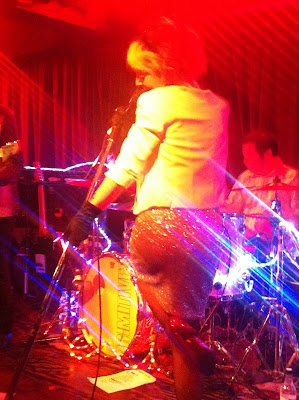 I see artists supposedly past their prime on a regular basis and it’s usually a case of focusing on the good parts, glossing over the not so good, and cutting them plenty of slack on account of credit earned in previous lives.  At times it’s even enough to have a few beers in their company as a small payback for the pleasure they’ve given.  Occasionally though, like the New York Dolls, they can still cut the mustard by dipping into their illustrious past yet remaining firmly in the present.  When done well, devoid of showbizzy revivalism, it’s unbeatable.  The Primitives on Friday night, on whatever gig measuring tool one uses, were unbeatable.

They took ten songs from their past and with beautiful symmetry matched them with ten songs from their present.  The white-knuckle ride of early single “Stop Killing Me” was thrilling and yet near equalled by the tambourine battering given to Suzi Jane Hokom’s “Need All The Help I Can Get”.   The dreamy psychedelic jangle of debut 45 “Thru The Flowers” (which received the loudest cheer of the night) was suitably twinned with their folk pop take on Polly Nile’s “Sunshine In My Rainy Day Mind”.

Most of the current material was taken from their recent 60s girl-sung covers LP Echoes and Rhymes but old favourites, with their baa-ba-ba-ba-bas and their sha-la-la-la-las, sound like girl group covers anyway.  The effervescent “Spacehead” was a prime example, albeit a girl-fronted group covering the Ramones covering a girl group.  Hearing “Spacehead” followed by a powerfully petulant “Sick Of It” was the best back-to-back songs I’ve seen played in a long time.

Tracy Tracy remains a beguiling performer, possibly a more confident one than before, and sparkled from her kitten ears to her glittery toes.  She always, of course, received all the attention (one man on Friday patiently waited at the front of the stage to give her a bunch of red roses, not sure where that fitted on the sliding scale of kind gesture/creepy weirdo) but I always loved the way Paul Court looked on the cover of their second LP, Pure.  He’s still got a decent Barnet and an eye for a nice Chelsea boot, and Tig Williams kept standing behind his petal painted drum kit in shades of Keith Moon, whose picture adorned a vintage lamp stood on Paul Sampson’s bass amp.  The Primitives have lost none of their style and class.  I wonder what they do for day jobs.  They shouldn’t have any.

There was no reminiscing, no do-you-remember when?, so it didn’t feel like an exercise in nostalgia, it felt like watching a fresh band with a great bunch of songs.  The only reference, and a telling one, came in their introduction to “Crash”, “This is our take on a song from the 80s by a band called the Primitives”.  I remember them, they were good, but these Primitives are blooming marvellous.
Posted by Monkey at 15:36