MONKEY'S SUNDAY SWING #1: MAYBE IT'S BECAUSE I'M A LONDONER 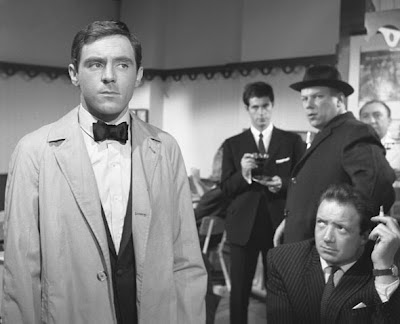 In an idea partly inspired by From Desk Til Dawn and Mod Male blogs, I might try using Sundays to round up a few bits and bobs that have caught my eyes and ears throughout the week which don’t make a post of their own but are worth sharing.

We’ll start with the film The Small World of Sammy Lee.  No, it’s not about the ‘80s scouse footballer of the same name who was famously fat, round and bounced on the ground (and when signed by QPR was, according to the song, “worth a million pounds”), but about a strip club compere who owes a small fortune in gambling debts and has a day to raise the money or he gets done over by the heavies (including one very mod mobster).  Any British film from 1963 that features lots of location footage is of interest purely for that and the opening sequence which sweeps through Soho filled with clip joints, restaurants and coffee bars doesn’t disappoint.  Even better than recognising West End and East End locations, is that it’s a good film in its own right.  Newley is convincing as he tries to keep a clear head as the pressure mounts, and a Who’s Who of mid 60s British film and television: Warren Mitchell, Wilfred Brambell, Roy Kinnear, Julia Foster, Derek Nimmo and others back him superbly.  A new favourite.

By strange coincidence, on the day I watched that I bought The Lowlife by Alexander Baron, a novel first published in 1963, and, as well as the year, shares many similarities with The Small World of Sammy Lee.  Harryboy Boas is another Jewish East London gambler who is more than content to live his life on his own terms: gambling, dressing up, visiting prostitutes, spending money when he has it, and reading books in his small bedsit.  His sister and her husband try to coax him into settling down with a proper income, suggesting buying property in the slums to “stuff full of niggers”.  It does provide a vivid picture of how Hackney was at the time (Harryboy’s view of immigrants and the local community is far more positive than that previous description) and Soho is identical to the one in Sammy Lee.  I’m only a third of the way through the book and Harryboy is being drawn into the secret lives of his new neighbours in his lodging house and he will soon be dragged into “an underworld where violence and revenge stalk those who can’t come up with the money”.  Excellent stuff so far.

I’ve been meaning to write about Jeremy Deller’s Joy In People exhibition at the Hayward Gallery in London for a while but it ends on 11th May, so gets your skates on if you’re local (or have a nose through the accompanying book).  Deller’s latest creation, Sacrilege, was in the press the other week: a gigantic inflatable Stonehenge plonked overnight in Glasgow Green much to the surprise and delight of locals who started bouncing all over it.  Joy In People contains many other delights and if you like some pop in your art then you’ll appreciate work inspired by and featuring Keith Moon, Manic Street Preachers, Happy Mondays, Neil Young, World of Twist and acid house.  Deller isn’t an “artist” in the sense of here’s a painting, here’s a sculpture kind of way (although there are those), he’s more a curator or instigator of events so they don’t always work, nor were intended, as gallery artefacts, but his more serious studies such as a full scale acted reconstruction of The Battle of Orgreave from the miners’ strike of 1984, or taking the wreckage from a Baghdad car bomb on a tour through America with former American servicemen and Iraqi citizens invite further thought and discussion.
Posted by Monkey at 10:36