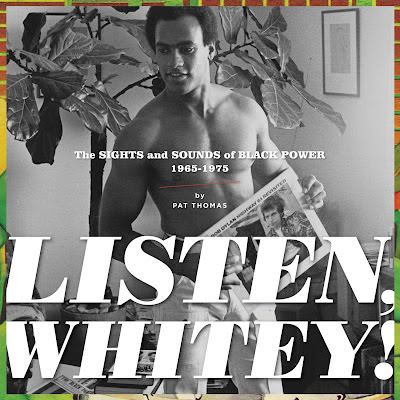 Listen, Whitey! The Sounds of Black Power 1965-1975 is new book by Pat Thomas which explores how the Black Power movement intersected with pop culture; where revolutionaries were considered pop icons and musicians were seen as revolutionaries.

Even without delving into Thomas’s passionate text it’s a striking book.  Nearly 200 colour pages illustrated with record sleeves, posters and handbills  It’s surprising how many LPs Thomas discovered, both from small home grown labels and ones backed with the financial clout of Berry Gordy.  As Michael Torrance from Black Panther vocal group The Lumpen put it, “Some folks don’t read, but everyone listens to music”.  They didn’t even need to do that as the sleeves alone like Rappin’ Black In A White World by The Watts Prophets, with a child holding a machine gun against a deprived neighbourhood backdrop, say it loud without the need to listen or read.  From a design angle alone, Listen, Whitey! is a forceful document of the time.

The author gave a talk at East London’s Rough Trade record shop last week and began by stressing the Panthers were not anti-white, they were pro-black, an important difference.  They were also partly funded by white radicals and looking at Thomas and the thirty people gathered its apparent current interest in the subject (like blues and soul) is largely the preserve of middle aged white men.  These whiteys, at least, are listening.  And for 75 minutes we listened to Thomas discuss and play tracks from his book’s companion LP/CD.  Despite being initially thrown by the lack of an available power-point, thus unable to give his prepared talk, he swiftly adlibbed and got into his groove.

I’d had the CD a while and it’s not an easy listen.  Not only because of the nature of the more militant tracks but because the mix of styles make an uneven compilation: rallying speeches, driving jazz, spirit raising soul, stand-up routines and prototype hip-hop mix with white folkies, that bloke from the Beatles and interviews denouncing Timothy Leary.  The majority work best, and impact harder, when heard in isolation and better still with their story explained.

Thomas warmed noticeably to his theme and sensing on safe ground played a few tracks he’d never played in the 40 similar talks he’d given in America “in case they caused a riot”.  Assessing the only danger here was of someone accidently dropping their china cup of mocha he let loose “Die Nigga!!!” by The Original Last Poets, as powerful a piece of performance poetry as you’ll ever hear.  I have to turn the volume down very low at home for fear of my neighbours hearing the terrifying screams of the title.  If that track turned up the heat, Kain’s brutal “I Ain’t Black”, an extraordinary track featuring a beating rhythm, chants of “you black bastard” and “you white motherfucker” in various vocal styles over a jazz backing, burned the mother down. Well, it didn't really, but we nodded knowingly and smiled politely.

To buy both the book and CD works out the best part of £40, which is a hefty outlay, so it’s a pity the CD wasn’t free with the book, but the book itself leads to so many fascinating and undiscovered treasures the journey, and associated expense, has only just begun.