WILLIAM S. BURROUGHS: ALL OUT OF TIME AND INTO SPACE at the OCTOBER GALLERY 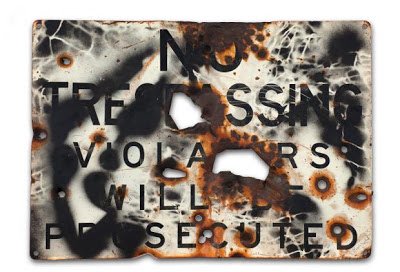 The first published interview with William S. Burroughs appeared in the 1961 issue of Journal for the Protection of All Beings, a periodical edited by Lawrence Ferlinghetti and published by City Lights. Conducted by Gregory Corso and Allen Ginsberg it began with Corso asking “What is your department?” to which Burroughs replied “Art and science”.

Burroughs is of course primarily known for his writing but using today’s terminology he was a multi-media artist and his reputation as such grows with each passing exhibition and event. There have been a number in London alone over the last few years: paintings and shotgun art at a series of shows at the appropriately named Riflemaker Gallery; tape experiments at IMT Gallery; films made with Antony Balch at the National Film Theatre; collaboration with his close friend (and in some ways mentor) Brion Gysin at the October Gallery; and a major retrospective at the Royal Academy which featured elements of all those things and more, including photo-montage, text-image collage and even sculpture.

This latest exhibition focuses mainly on the abstract/action paintings he produced during the last ten years of his life until his death, aged 83, in 1997. Those years don’t account for his most interesting or innovative period but there’s still much for the Burroughs enthusiast to enjoy (and by implication those who will wonder why he stuck photographs of lemurs to paintings might find it bewildering). The best pieces are ones like Death by Lethal Injection (1990), a combination of yellow and black spray paint, ink and stencils. The more one looks the more things gradually appear. There is definitely a figure in a prison cell but is that really a shadowy man in the bottom left corner? Is there really a ghostly face laughing in the foreground? Is that somebody pulling a belt around their arm? Burroughs would've studied this closely. For him events weren't random acts and what might look like haphazard chance was the manifestation of unseen forces and agents controlling his every move. Similarly it is possible to get inside the thick blood red and bright yellow psychedelic heat of Radiant Cat (1988). If I had £8000 burning a hole in my pocket that small painting would be on my wall tomorrow.

The manilla folders Bill decorated with swirls of paint splodges are reminiscent of primary school children painting one side of a butterfly on a piece of paper and then folding it to create the other half; only not as effective. Cue “Modern art? What a load of rubbish. My five year old could do that.” The crude black marker-pen outlines of figures Bill set up in his yard to shoot holes in have debatable artistic merit but are amusing nonetheless as they reinforce the cartoon image of a gun toting Burroughs we know and love. The metal No Trespassing sign spray painted and peppered with shotgun blasts is “very Bill” and spells out his opinion of law enforcement - again, agents of control.

My favourite part of the exhibition is the glass cabinet containing odds and ends from his studio including some of his stencils, not least the one of a penis. Yes, William Burroughs’s penis stencil. Not necessarily a stencil of the penis belonging to William Burroughs but certainly a stencil which belonged to William Burroughs in the shape of a penis. Glad we've got that straight. My, what started as a look at the artistic achievements of one of the 20th century’s most influential writers ends with knob gags. Don’t blame me, for all my highfalutin pretensions there’s no getting away from the fact that deep down I'm controlled by the spirit of Sid James.

William S. Burroughs: All Out Of Time and Into Space is at the October Gallery, 24 Old Gloucester Street, London, WC1N 3AL, until 16th February 2013, admission free.
Posted by Monkey at 09:21