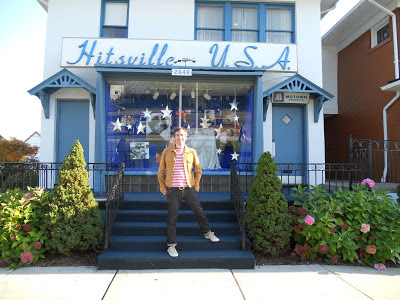 If, like me, you consider the music that danced out of 2648 West Grand Boulevard and associated Detroit studios the greatest collection of records ever produced under the stewardship of one man – take a bow Mr Berry Gordy Jr. - then there’s gonna be a whole lot of shakin’ going on in your heart once you meet the Motown Junkies site.

Motown Junkies is an on-going attempt to review both sides of every Motown single released between 1959 and 1988. As I write, they are up to posts #565 and #566, both sides of Kim Weston’s April 1965 “A Thrill A Moment”. It sounds like a daunting task and their ambition is multiplied when you read their reviews. Theirs is not a quick four or five lines but an in-depth study of the song, the recording, the musicians and the context in which the records were made and released. Each essay is beautifully written and open new ways of listening to these marvellous (and, sometimes, not so marvellous) songs. There’s a slight danger over-analysis can dull some of the magic so it’s good a steady stream of knowledgeable and equally passionate aficionados and fans are able to add comments beneath the entries and argue over the final mark out of ten score.

It’ll always be what’s in the grooves that count but those grooves now have extra depth.