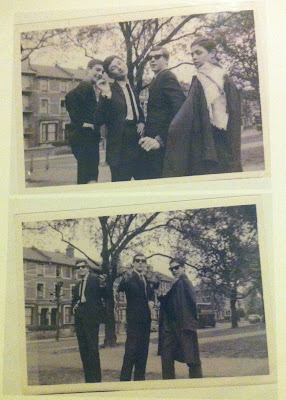 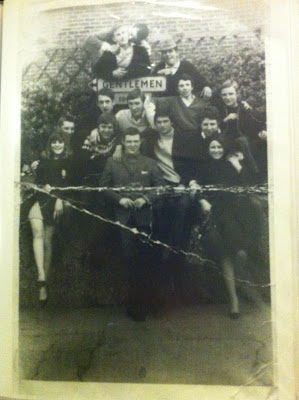 These photographs of young Mark Feld caused such excitement amongst the Marc Bolan and mod communities after I posted them on Twitter that I don’t know why I didn’t feature them here first.

They were all included at the recent Stamford Hill Mods exhibition at Hackney Museum but tucked away in a plastic folder rather than used on the main exhibit boards (I snapped them on my phone hence the picture quality). Information is sparse but the four lads at the top are believed to be Anton Dobrin, Gerald Goldstein, Chico Kovlosky and Mark Feld. The pictures weren’t dated but captioned “50 years ago wearing Raybans” which would make them circa 1962 the same year Feld appeared in Town magazine aged fifteen. Mark looks similar to those Town photographs taken by Don McCullin although his face is slightly slimmer here.  Notice he’s the only one of his group to compliment his outfit with an overcoat and scarf draped over his shoulder (although all thought to take shades with them despite it seemingly autumn and a bit chilly). According to Marc Bolan later, the Town feature “came out [September 1962] about seven months after they’d come down to see me and taken the pictures. During that time a Face’s wardrobe would’ve been completely transformed seven times over”.  The pictures were provided to Hackney Museum by Richard Brockhume and according to Bolanologists far greater than I have not been previously published.

Even less information is available for the group of Stamford Hill/Hackney mods gathered near a gentlemen’s’ toilet but it looks a couple of years later and beautifully captures the fashions of the day including hair, hems and hats. Whoever you all were, you looked brilliant.
Posted by Monkey at 17:43