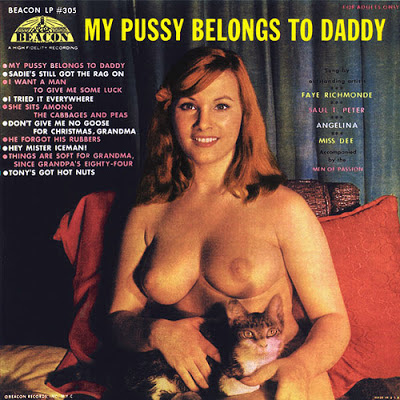 1. The Louvin Brothers – “The Great Atomic Power” (1952)
Considering Ira and Charlie Louvin feared mushroom clouds of destruction would rain down from on high blotting out the works of man they sounded remarkably upbeat about it. The reason?  God will surely save His children. Phew, that’s a weight off my mind.

2. Mel Williams – “Send Me A Picture, Baby” (1955)
When waiting to cut his new 45 for Federal Records I wonder if Mel asked for something people can whistle along to. If he did, they took him literally. What otherwise would be a standard big voiced R&B stroller is made more interesting (or perhaps annoying) by employing a whistling passer-by.

3. Faye Richmonde – “Sadie’s Still Got The Rag On” (1957)
Boys, if you’re thinking of knocking on Sadie’s door and asking her out to play, her mum reckons you’ll be wasting your time because she’s still got the rag on. Mumps, she says, but I’m not convinced. From the album My Pussy Belongs To Daddy released, presumably under the counter, in 1957.

4. Smokey Robinson & The Miracles – “When The Words From Your Heart Get Caught Up In Your Throat” (1968)
That’s such a typical Smokey phrase. You can just imagine him coming up with the title and knocking the rest of the song together over lunch. The competition would’ve killed for songs like this yet Smokey could afford to chuck it away on the flip of “You Can Want”.

6. Darrow Fletcher – “(Love Is My) Secret Weapon” (1975)
I have to be careful to play this sort of stuff out of the earshot of Mrs Monkey as a pound to penny she’ll go “Turn this disco shit off” or “What’s this Luther Vandross bollocks?” If that’s also your natural reaction to a silky mid-70s soul dancer then you’d best steer clear too.

7. Siouxsie & The Banshees – “Supernatural Thing” (1981)
The Banshees wouldn’t be top of the pile of expected coverers of Ben E. King’s funk classic but they did it. The studio take appeared as the B-side to “Arabian Knights” but I’ve been playing the live version recorded for a Richard Skinner BBC session; all quirky rhythms and jagged shards of metallic noise. I'm still hoping they'll return one of these days.

9. Band A Part – “Blankets” (2011)
Despite the title this is sung in their native Spanish tongue. My grasp of the lingo is too shoddy to grasp what they’re on about but they sound enough of a sweet blend of St Etienne and Camera Obscura to get un abrazo from me.

10. Ballard – “Pretty Colours” (2013)
A rough and ready pill-eyed adrenaline rush written, recorded and released by Darren Riley quicker than it takes the Rolling Stones to assemble their stage set.
Posted by Monkey at 10:26