BEDSIT DISCO QUEEN: HOW I GREW UP AND TRIED TO BE A POP STAR by TRACEY THORN (2013) 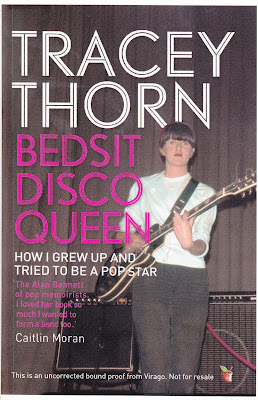 Autobiographies are usually only read if one has an interest in the author but Tracey Thorn's Bedsit Disco Queen is hugely enjoyable even if you have scant knowledge or fondness for her music. I read the entire book in a weekend (a feat I seldom achieve) after only intending to have a quick flick through. It’s written so engagingly I was gripped by the opening chapters and then ploughed right through. There’s little about her early childhood, what her parents did for a living, and all that David Copperfield kind of crap but starts with her discovery of music. Her diaries note in 1976 she bought six records; then eight in 1977: the first two Jam singles, Dr Feelgood, the Adverts, Elvis Costello, the Vibrators and two by the Stranglers. That’s a creditable haul yet she’s honest enough to admit the pages also contain entries “Steve Jones – CCORR!!” and the mystifying “Bob Geldof is so gorgeous”.

Tracey's earliest experiences of being in bands are funny and self-effacing. Asked to move from rhythm guitar to vocals her shyness forced her to audition by singing from inside a wardrobe and a cassette label of The Stern Bops is scrawled in a way only teenagers can with DO NOT PLAY EVER in angry biro. Her first band of note was The Marine Girls, an all-girl group who made decidedly lo-fi recordings in a shed and Kurt Cobain made frequent reference to in his journals. This period reveals a charming bygone era from the yellowing pages of the NME when bands released their own albums on cassettes; John Peel played tapes on the radio; and the music press happily covered these fledgling DIY bands. It wasn’t that easy for everyone but it was here and would continue with Tracey’s first solo album, A Distant Shore, and then into the early days of Everything But The Girl which she formed at Hull University with Ben Watt.

The first Everything But The Girl gig took place at the ICA in London in 1983 during the weeks between Paul Weller flinging down his Rickenbacker with the The Jam and dancing awkwardly on an open top bus with The Style Council. Nowadays bands put a restraining order on Weller to prevent him from turning up unannounced and pestering them whilst they’re working, it doesn’t mean much anymore, but when he appeared on stage with EBTG singing – quite incredibly – “The Girl From Ipanema” it was a massive deal. I remember reading about it and later repeatedly playing Tracey’s version of “English Rose” that featured on a Cherry Red cassette. She devotes a fascinating chapter to this episode which reveals much of Paul’s way of working and how difficult it was to keep up with his rapidly moving mind and ever changing mood. The similarities between the early, jazzy EBTG and the Council’s Café Bleu (with Tracey singing “The Paris Match” and irritating Weller with her pronunciation of “fire”) are there for all to hear.

Even after their first album, Eden in 1984, Tracey was well aware Everything But The Girl were considered in certain quarters “soppy wimps, wallowing in easy-listening blandness, making jazz-tinged soft-rock background music for bedwetters.” It’s an accusation she gently yet persistently pushes against and with some justification aligns herself to the post-punk generation and if her music later took a different road her political path and feminist ideologies remained fixed.

After this a progression through a series of phases: The Smiths phase (watch the near perfect Morrissey impression in the video to "When All's Well" there’s good stuff here about Morrissey and his early championing the band); the orchestral phase with their best album, the grand Baby The Stars Shine Bright (highly recommend that LP); the huge “I Don’t Want To Talk About It” hit (I don’t buy her surprise at being labelled Housewives’ Choice by claiming they were covering a cool song by Crazy Horse’s Danny Whitten); the middle-of-the-road/MOR phase; and then, just as they’d been dumped by their record label, a surprise worldwide club hit with “Missing”. Bands often – sensibly – try to distance themselves from scenes and movements but I got the impression EBTG felt a sense of unwelcome isolation from much of the music industry and Tracey could’ve used some support from those of a similar mind. Part of the tale is like any other musician’s book with ups and downs and episodes of The Record Company Doesn’t Understand Me but notably there are no I’m Not Proud Of My Actions nor My Drug Hell chapters. Tracey comes across admirably level-headed; a little fiery at times; shy, self-deprecating and insecure at others. It’s a super book about music life and everyday life and wonderfully told (not least for the description of a young Bobby Gillespie…)

Bedsit Disco Queen by Tracey Thorn is published by Virago on 7th February, priced £16.99.
Posted by Monkey at 16:41