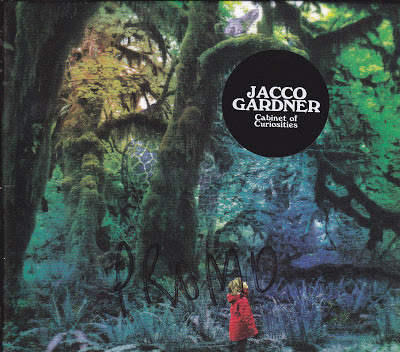 There’s a lot of music around at the moment professing to be psychedelic – it must be hip this week – when in fact it is often little more than glorified indie bands adding backward guitar, phasing and regurgitating lyrics about dandelions and kaleidoscopes. The term covers a wide spectrum and psychedelia can be clumsy and lacking in subtlety and imagination; none of which apply to Jacco Gardner’s debut album Cabinet of Curiosities; which whilst not truly mind altering does possess an enchanting hallucinogenic quality.

Like the best of anything, Gardner – who plays all the instruments on the record except the drums – builds on the past to create his own present, albeit one assembled from vintage components. Wisely eschewing the tired and tatty twin pillars of American acid rock and UK village fete psychedelia, Dutch Jacco conjures his own magical garden scenes liberally sprinkled with Tinkerbell’s fairy dust. His songs don’t swirl; they gracefully pirouette.

I couldn’t tell you much about baroque music beyond The Left Banke were described as such – I think because they were familiar with a harpsichord rather than an intimate knowledge of early 17th century compositions – and they’re are an obvious reference point and no review could ignore the guiding voice of Syd Barrett.

The single "Clear The Air" caused gasps of astonishment when shared around the internet last year and it’s still the track to beat. The other eleven don’t reach that height nor do they try, instead Gardner is content to poke a silver cane at the undergrowth to reveal dusty treasures. As beautifully executed as they are, they do turn at a slowish speed – like a ballerina on a music box – so once into the second half of the album an occasional increase in tempo or a song with a more immediate melody would help maintain interest as it does run out of steam slightly. I’m looking forward to seeing Jacco play the Beat Bespoke weekender in March and how these songs work in a bustling live setting as Cabinet of Curiosities needs time to grow gradually in the mind; those expecting a trip to the UFO Club like "Clear The Air" hinted at might be disappointed.

Cabinet of Curiosities by Jacco Gardner is released by Trouble In Mind on 12th February 2013 and Jacco plays the Beat Bespoke in London on 31 March.
Posted by Monkey at 17:05