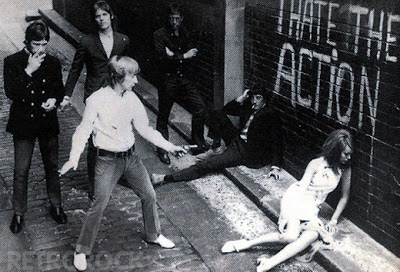 Seeing how everyone else is doing one I’ll follow suit with a review of the year; after all it’s a quiet week and easier than writing anything new. Think of it as one of those television shows cobbled together from previous episodes after a main character dies or someone has a dream remembering – in soft focus – all the fun times they had. Cue hazy screen…

The uncovering of only the second piece of film footage of The Action – doing "I'll Keep On Holding On" outside the Royal Albert Hall – was the start of fruitful year for fans of this most treasured band which culminated in the long awaited publication of Ian Hebditch and Jane Shepherd’s superb biography The Action: In The Lap of the Mods and the release of a previously unheard recording. In between those landmarks I was lucky enough to interview drummer Roger Powell and we spent a couple of hours chatting about the band. I was especially interested in the way he compared the mod Action period with the underground Mighty Baby period that followed. If the launch party for the book felt like the final chapter in the Action story, fear not: I can reveal that Circle Records will on the 18th February 2013 release Reggie King’s Looking For A Dream, a fifteen track compilation of recordings he made circa 1969, mostly with his ex-Action bandmates, which will elevate him even higher in people’s estimation. Mark that date on your diary now.

The Action were firmly established at the top of my loves but 2012 saw a new name, Rodriguez, enter high on that list. Somehow he’d evaded my radar until the Searching for Sugarman documentary hit cinema screens in July but now he’s up there as a firm favourite. The film has this month been released on DVD and I can’t urge you enough to watch it. It’s brilliant and incredibly moving, as are the best tracks from his two albums Cold Fact and Coming From Reality. It was a real privilege to see Rodriguez at the Royal Festival Hall.

This week has seen the passing of soul sisters, Marva Whitney and Fontella Bass. I don’t usually mark these events as new entrants to the Rock and Soul Heaven Choir are so frequent it would make Monkey Picks read like the back pages of the Eastbourne Church News but I was genuinely saddened by the death of Michael Davis of the MC5 and the indomitable Etta James. The MC5 with Primal Scream show in 2008 is one of the best gigs I’ve ever been to and back in 2004 myself and friend were in New York when we saw that Etta was due to play B.B. King’s club in a couple of weeks’ time. We seriously toyed with the idea of returning especially to see her. We didn’t and I’ve regretted it ever since. Special mention here to the Independent newspaper for making her front page news with a massive photograph. If you’ve not read Etta’s autobiography Rage To Survive you’re missing out.

On the subject of books, Dougal Butler’s ludicrously funny Moon The Loon, telling of his time with Keith Moon, saw print again as Full Moon and also made it as a “talking book” read by Moonie’s mate Karl Howman. Dougal, forever the storyteller, entertained us – quite candidly at times - one Sunday morning as we conducted a long interview with him about Keith Moon and his role in attempting to keep his employer out of too much trouble. We (Mrs Monkey and I) met with Dougal a couple of other times, most notably at Pete Townshend's Q&A session down Brick Lane to promote his autobiography Who I Am (still not read it). That night turned out to be a mod episode of Stella Street with Pete, Dougal, Richard Barnes and  supporting cast of us who followed in their desert boots.

On the hobnobbing front it felt slightly surreal talking to Public Enemy's Chuck D and Flavor Flav in my local record shop but a chance encounter with the Manic Street Preachers' James Dean Bradfield was something of a dream come true and Mr Bradfield was as lovely a man as I always thought/hoped he’d be.

Every band you’ve long forgotten has reformed during the last few years but the one I’ve been most taken with is the gradual re-emergence of The Primitives. No big fanfare, just a gentle easing back into view with a gloriously infectious and upbeat album Echoes and Rhymes and a a terrific gig at the Borderline. 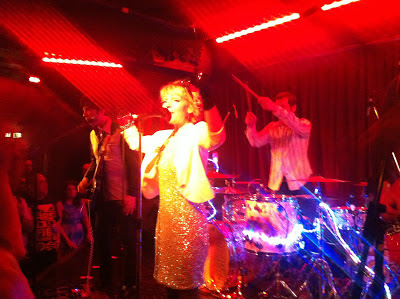 The Primitives didn’t in any way feel nostalgic but the same couldn’t be said for early 80’s mod favourites The Truth who played the same venue. It did though give me an opportunity to recount my young mod story and judging from the reaction it received it was an experience shared by many. A rare UK appearance by Todd Snider ("Who?" you ask) was a gig highlight but although I’m always searching for new bands its apparent most of the gigs I saw was by acts over a certain age so I need to make a concerted effort to check younger bands next year. One especially young band I did see was The Strypes and all eyes will be on them during 2013 to see if they make the transition from outstanding covers band to creating something of their own.

One new band who made a huge impression on me were Kontiki Suite and I’ve already banged the drum loudly for their stunning debut album On Sunset Lake which gets a full release in the next couple of weeks. Shrag’s Canines album is the other one which has most impressed me. It’s difficult to describe but it’s a grower and once under the skin stays there. I caught Shrag with The Lovely Eggs at the London Palladium when DJing during a memorable night put on by Idle Fret records.

For twenty of the most memorable songs of 2012 check the 2012 Spotify Playlist.