BOBBY WOMACK at THE FORUM, LONDON 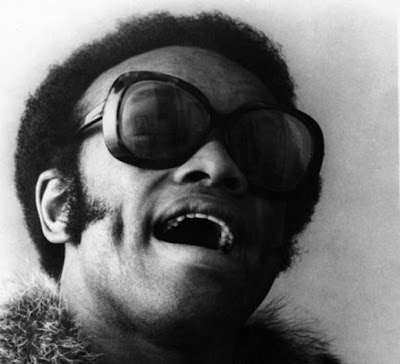 It’s a game of two halves as veteran midfield workhorse Bobby Womack proved on Tuesday when he performed a couple of sets at the Forum in Kentish Town.

In the first half he lined up to showcase songs from his current The Bravest Man In The Universe album. He began, sat on a stool, with a guitar, by delivering a soul-stirring reading of the old gospel standard “Deep River”. It’s one of the best tracks on the album but to witness it, to experience it first hand, shone a light on how powerful and affecting live music can be. That was true of the whole set which featured mainly new songs plus a couple gospel classics. His small combo featured the album’s producers Damon Albarn and Richard Russell who let Bobby’s voice – soaring high, swooping low and with those gruff bluesy licks like Bobby Bland - take the lead and accompanied it with a fat bass sound, minimal percussion, and various electronic beeps, clacks and squiggles. Womack - in black hat, nice black jacket, shades and striped jersey - sounded timeless yet the music was now and worked well, especially in a live setting. I wasn’t too fussed about the album beforehand but it came to life here and showed soul music can be contemporary yet still keep its church roots. An uplifting “Jubilee (Don’t Let Nobody Turn You Around)” ended the first half before Bobby departed and left everyone to “go to the bathroom or go for a joint”.

The second half, with a completely different and larger band, bought a complete transformation from the instant Womack was introduced with a cry of “It’s Showtime.” And showtime it was: Showtime on an expensive cruise liner or showtime around the pool in Marbella in 1988. Bobby, having looked the model of understated cool, had changed into a red leather cap and jacket mistaking the Forum for a fetish club. The songs were drawn out and embellished with guitar solos, alto solos and a herd of backing singers fighting for attention; all of which threatened to drown out the vocal he’d so impressed with previously.

I’ve focused on the negative and on other occasions I might’ve been content simply to hear “Across 110th Street”, “Harry Hippie” (which I love), “That’s The Way I Feel About Cha”, “Stop On By”, “Lookin’ For A Love” etc (all of which he sang) but it was impossible not to notice the stark contrast to the first set. Judging by the audience reaction to both I was in the minority as what looked like the North London Guardian readers’ convention whooped their delight every time he broke into a tribute to Marvin Gaye or Wilson Pickett or whoever. Womack’s CV - from his Sam Cooke days to Gorillaz - is phenomenal, I can’t knock him and the fella has even been treated for colon cancer this year so to then do shows like this speaks volumes about his character. He wasn’t bad - far from it, he's voice has kept remarkably well - but this soul cabaret "this is for all the lovers in the house" style is horribly dated and does a man of his standing no favours. By the time it got to a plinky-plonky version of “It’s All Over Now” I was wishing it was.

Back in the late 80s The Housemartins scored all their gigs like football results. Applying that here Bobby Womack stormed to a deserved 3-0 half-time lead only to throw it away in the second half. Final score: 3-3.
Posted by Monkey at 09:05