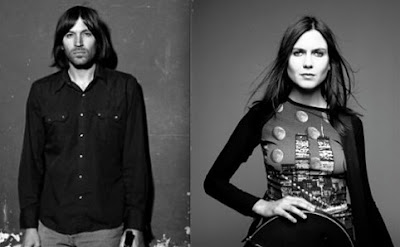 In the downstairs bar afterwards the barman asked the geezer next to me what he thought of the gig. “Half good, half shit,” he replied. A harsh assessment but one that didn’t require any further explanation.

Billed as “Evan Dando and Juliana Hatfield” it was difficult to know what to expect but anyone hoping the reunited pair would mark the 20th anniversary of The Lemonheads It’s A Shame About Ray by playing the classic album in it’s entirely were to be disappointed, and I don’t use the term “classic” lightly; it’s one of those rare start-to-finish brilliant records.

With no fanfare the pair took to the stage. Dando strummed an acoustic guitar and began “All My Life” from his only solo credited LP, 2003’s oft-overlooked Baby I’m Bored. When in shape he has one the greatest country-smoked voices one could wish to hear and he was in shape. To his left Hatfield played electric and sung back-up but she was no Emmylou to his Gram; her sharp pitch distracted rather than complimented. Roles were reversed for her “Butterflies”; back to Dando for a slowed down version of “Bit Part” the song most closely associated with the pair during their Lemonheads days thanks to Juliana’s screech of “I just want a bit part in your life!”; and when Hatfield sang her “Choose Drugs” with the refrain “I say it’s me or drugs, you choose drugs” it was hard to miss the huge finger of suspicion hovering above her singing partner.

“Confetti” and “Into Your Arms” were again stripped of their original fizz and bounce but Dando’s songs work however they’re played and brought his singing to the fore before the Velvet's “Pale Blue Eyes”.

The songs were shared out equally even before Hatfield announced they were going to play “ping-pong” and take it in turns with the other taking a back seat. This created a very uneven contest. Dando, casual and mellow, picked off his well-loved and familiar tunes (“It’s A Shame About Ray”, “Being Around”, “My Drug Buddy”) which were greeted warmly like long lost friends; whilst Hatfield, prickly and neurotic, let in a chilly breeze every time she opened the door to introduce unwanted guests. How could anyone expect to follow Dando after he was accompanied by a lady playing a rusty saw to his masterpiece “Big Gay Heart”?  Hatfield’s “My Sister” did register a flicker of recognition but mostly these were songs few knew and had little in common with the simple romanticism of Evan’s. Unlike my drink buddy I didn’t think she was shit, and the audience were generous in their applause, but no one needed Hughie Green to announce the result of the clapometer.

When Hatfield mentioned they’d been on “an exhausting five date UK tour” she countered the laughter with an insistence she was serious. “Well, I’ve enjoyed it,” was one of the few occasions Dando spoke. As the evening continued it did in fact become exhausting. The ping-ponging restricted any momentum; Hatfield became increasingly dreary; and Dando’s preference of playing all his songs as country ballads didn’t help lift the downbeat mood. Eventually Hatfield cracked and said something about “you’re the real talent, I’m gonna go”. It was awkward to watch. Evan Dando is a real talent (she said he never got enough credit because he was too good looking) but he’s a frustrating one: only two albums of original material in sixteen years since Car Button Cloth is a terrible waste. I don’t think I’ve enough fingers to count Hatfield’s in that same time, not that I’ve listened to them before and have no urge to now. They finished with Mike Nesmith’s song about travelling to the beat of a different drum. They sure do.
Posted by Monkey at 19:35